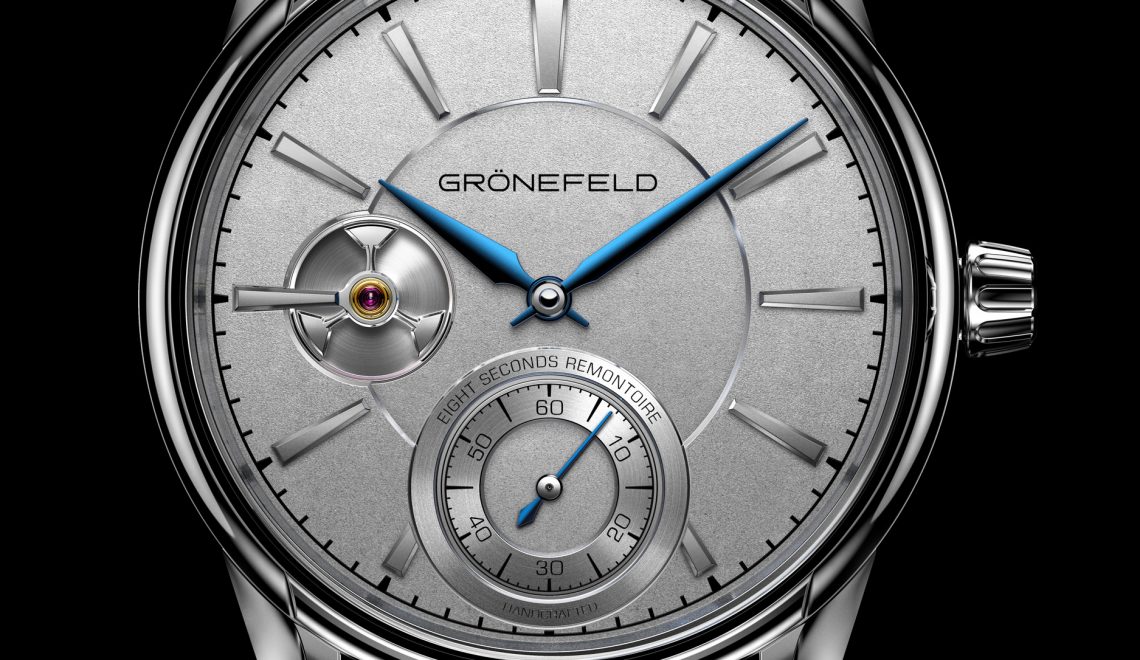 We start off this year with a new watch coming from the Dutch pride in watchmaking. Grönefeld, the horological brothers from Oldenzaal, has released a new beauty called: the Grönefeld 1941 Remontoire.

A watch that gives classy and beauty a new perspective, something that comes hand in hand with every Grönefeld watch out there. As you could read in one of our earlier articles, we are both great supporters of the work they deliver from that nice typical Dutch workshop in Oldenzaal. With the introduction of this watch, it’s not different. Stating that these timepieces are a work of art is really an understatement. The amount of time and hard work before completing one of these watches is true class. I don’t want to get in a fight with one of our readers, but I can say that there are people roaming this world who have payed roughly the amount of a large villa with three cars and a pool in the backyard, for a watch that’s less complicated than a Grönefeld. By complicated I do not only mean ‘complications’, also materials and amount of work. But hey, that’s a story that works while popping bottles of champagne in Ibiza, so let’s keep it in Ibiza and talk about the true passion in this article. 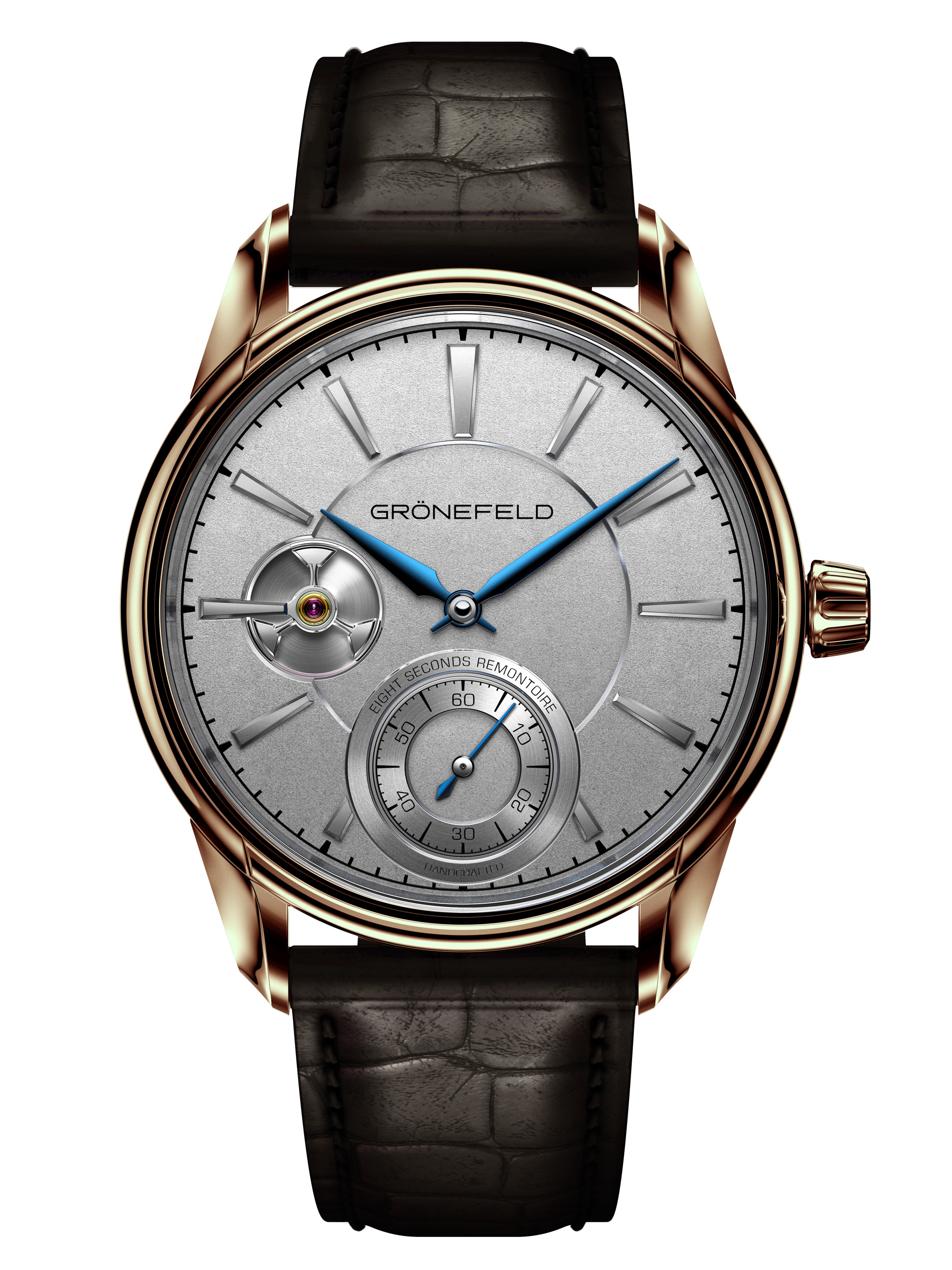 If you are familiar with the Grönefeld watches, you too can admit that these timepieces are made with the utmost precision and the highest level of watch passion out there. It’s hard to not exaggerate with the words I use trying to describe their watches. There’s one thing I can assure you: we didn’t receive a single cent for writing this, it’s just my modest opinion about a brand with a great vision. The Grönefeld 1941 Remontoire is based on memories of Tim and Bart’s childhood. They used to play a lot while hearing the melodies of the Saint Plechelmus Church clock and bells. Grönefeld, being a true family business, has always had a special bond with this particular church and movement. The grandfather of Tim and Bart – Johan Grönefeld – was the person responsible for the maintenance of the church’s clock movement. When Johan passed away, Sjef Grönfeld – Tim and Bart’s father – took over this responsibility. You could say that the Grönefeld brothers were raised with movements. 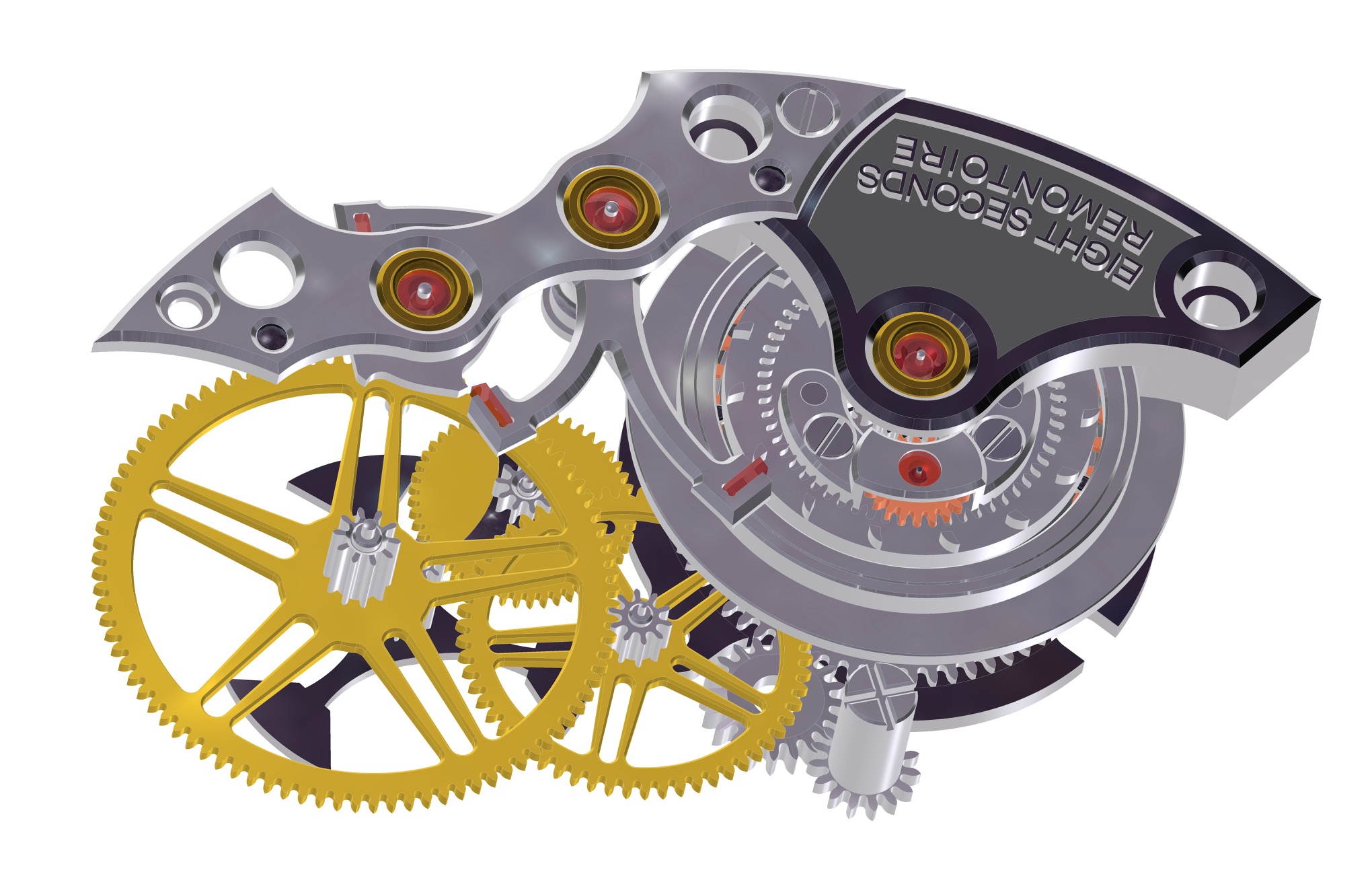 Now, the moment is there. We are actually going to talk about the watch, meaning if you knew before reading this article, this is the actual interesting part of it. But then again, a good intro is necessary for creating enthusiasm isn’t it?

The Grönefeld 1941 Remontoire is a hand wound timepiece with an ‘eight second’ constant force mechanism, ensuring that the power serving the balance wheel never changes. I hear you thinking, what has the story of that church to do with this watch? Well, the movement of that particular church needed a remontoire mechanism too. Since the clock was designed in such a way that the clock’s display was placed much higher than the movement, it was necessary to provide the movement with great force. Being that this amount of force would be too great for a conventional escapement, a remontoire mechanism was used in that movement. Now, we know that the distance between the dial of the 1941 Remontoire and its movement is far less, but Grönefeld wouldn’t be Grönefeld if they didn’t create a watch with a technical complexity. No further questions asked. Of course, we could tell you that this complication assures very accurate timekeeping, but we want to leave something to your imagination. 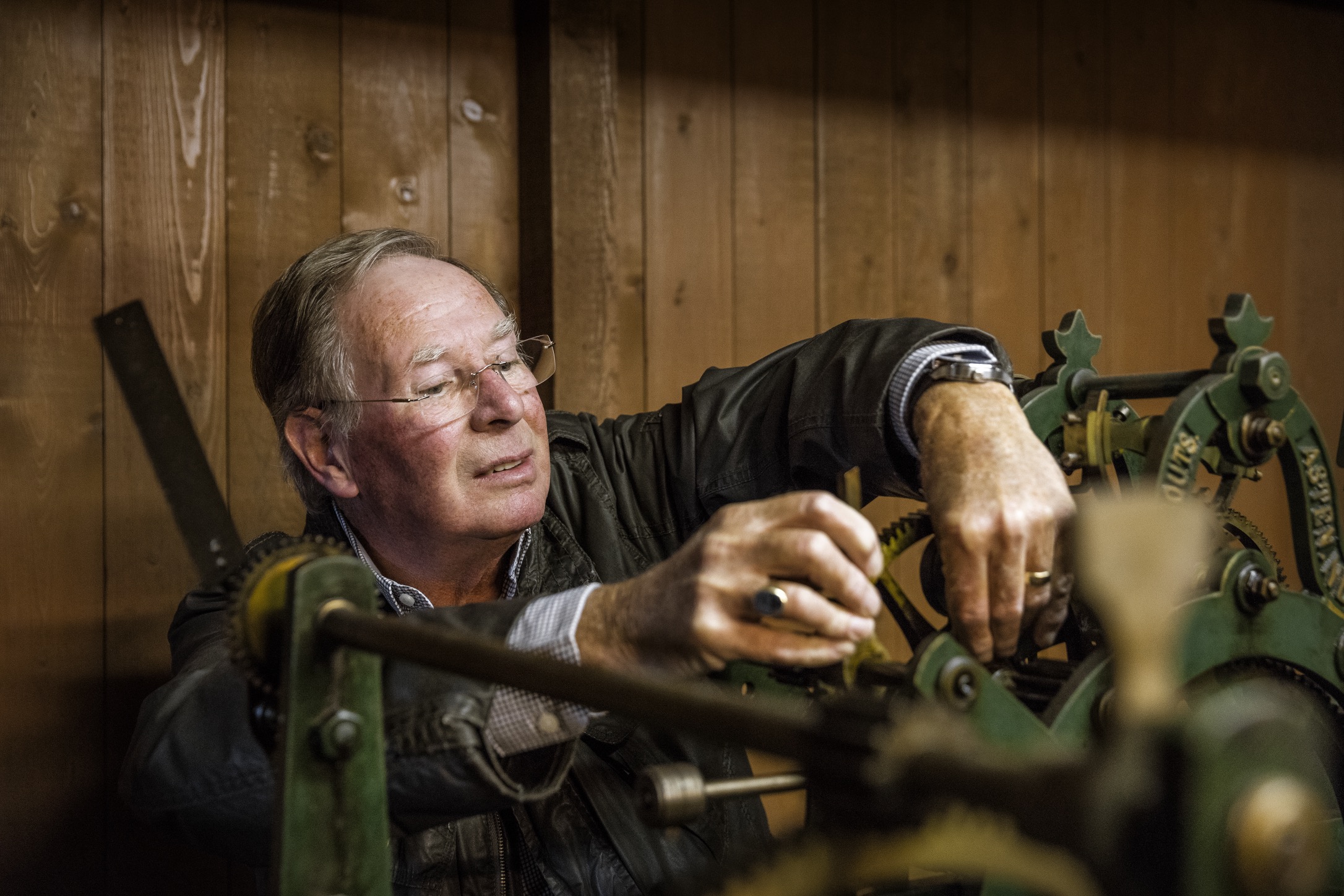 Sjef Grönefeld, the inspiration for the 1941 case. Grönefeld©

When seeing the watch for the first time, you’ll become a witness of seeing the 1941 case for the first time. Looking at the pictures, I was very pleased with the beautiful curves and lugs of this new case. It has a very distinguished look. A shape that doesn’t scream for attention, but compliments the owner. The case is named after year their father was born and is meant to show the positive influence Sjef Grönefeld had on the lives of both Tim and Bart. The case has been sculpted with a special cutter, to create the different characteristic surfaces. In between each cutting phase, the case is polished to ensure the precisely defined contours of the design and shape. We love the fact that the lugs look like they melt into the round shape of the case. It looks very cool, especially with the hollowed outer sides. If necessary, two hidden titanium screws positioned inside the case can detach the lugs, so it’s possible to polish them or even replace them. We hope the proud owner of one of the 188 pieces will take care of his timepiece like one should with such great technical accomplishment. So, what I’m trying to say is: keep those lugs nice and smooth and don’t throw your watch out of a plane, so the craftsmen at Grönefeld won’t have to replace those lugs. The new case is available in red and white gold. The white gold is a first time for Grönefeld since it’s alloyed with Palladium 150. This form of alloy is costlier but replaces the need for rhodium plating, due to that, the surface will not wear out. With a diameter of 39.5mm and a height of 10.5mm, the 1941 Remontoire is a very good fit to your wrist. Even though small measurements are becoming trendy again, I don’t think this watch is big in any kind of way. The design, use of material and dial interface are a great match and seem to make the watch look smaller than it really is. It’s is a matter of taste, but let me tell you, 39.5mm is a perfect size. 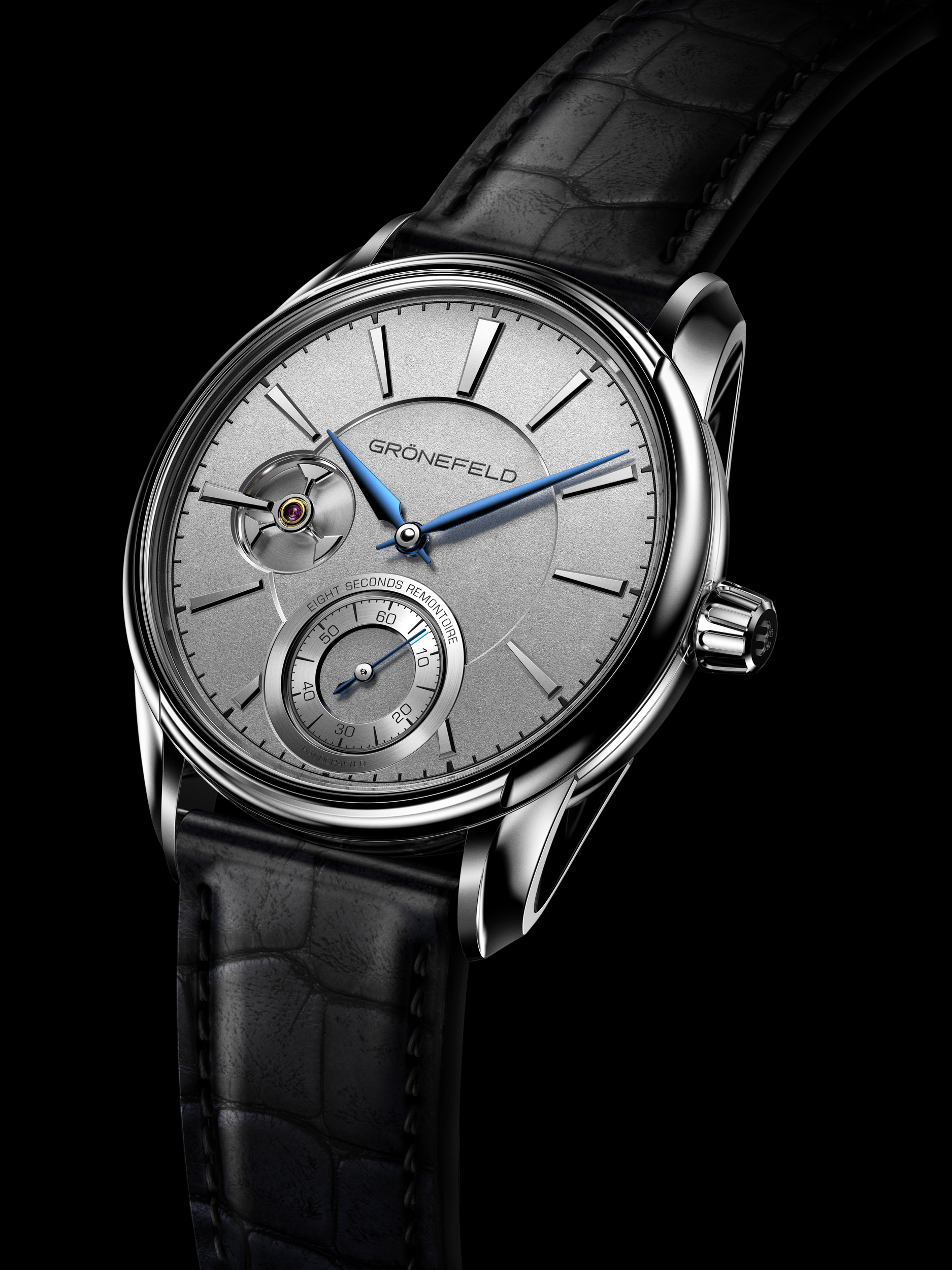 The case of the 1941 Remontoire is perfectly shaped and has a timeless design. Grönefeld©

The dial of the 1941 Remontoire is made out of sterling silver. It features frosted and satin-grained surfaces, augmented with subtle polished edges. A nice thing we like about the dial is the fact that the centre of it is placed lower than the hour indicators. With this particular design, Tim and Bart created a timepiece that has a ‘living’ look. The use of different ways of finishing makes it a timeless design. Well, it has time but in a different way, you know what I mean right. To create a subtle contrast, the watch is fitted with flame-blued hands. A feature I really like, and, in my opinion something that should only be used on watches crafted with the utmost eye for detail. The Grönefeld 1941 Remontoire features a governor to regulate the speed of the remontoire mechanism. Positioned at 9 o’clock designed to mitigate shocks to the gear train from the remontoire mechanism stopping. It rotates every eight seconds, adopting a calm tempo and bestowing a sense of calmness. Finally, on the lower position of the dial – the 6 – there’s a small seconds dial. Again, this dial features a lot of different surfaces and heights. The combination of these details create a dial that shows a lot of different things, but keeps it simple and classy. They played very well with the design without overdoing it. Every change of dial depth is accentuated with a highly polished bevelled edge, engaging beautifully with ambient light. I like. The dial is signed with “Grönefeld’, ‘Eight Seconds Remontoire’ and ‘Handcrafted”. To be sure you’ve understood the fact the dial says ‘Handcrafted’, Grönefeld finishes each component by hand to the highest standards. You could open up the movement of one of their watches – I would say you’re crazy but okay – and find that each part is shaped and polished in the best possible way. These two men don’t mess around. Quality is something known by many, but understood by few. Tim and Bart Grönefeld are a part of those ‘few’. 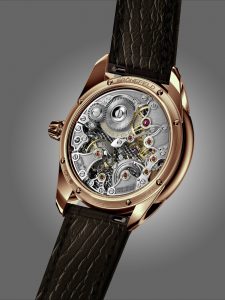 As we are used from Grönefeld, the movement is a true piece of art. Every watch enthusiast in this world knows the feeling when looking at a perfectly detailed and finished movement. Something I can do over and over again, without getting bored for a second. The stainless steel bridges of the movement are shaped in a way they refer to old Dutch houses, bringing the homeland of the two brothers to your wrist. The new 5-arm, double spoke gear train wheels exhibit a contemporary character, but their circular grained surfaces pay due reverence to fine watchmaking tradition. The movement includes a balance wheel with white gold timing screws and is equipped with a free-sprung over-coil hairspring with triangular stud. Gold chatons stand testament to the no-compromise specification of this movement whilst mirror polished screws feature chamfered rims and slots. Numerous surfaces glisten, courtesy of mirror-polishing which has been patiently executed by time-served hands. The inventory of different surface decorations will sate the desires of any purist and include snailed, grained, spotted and frosted surfaces. 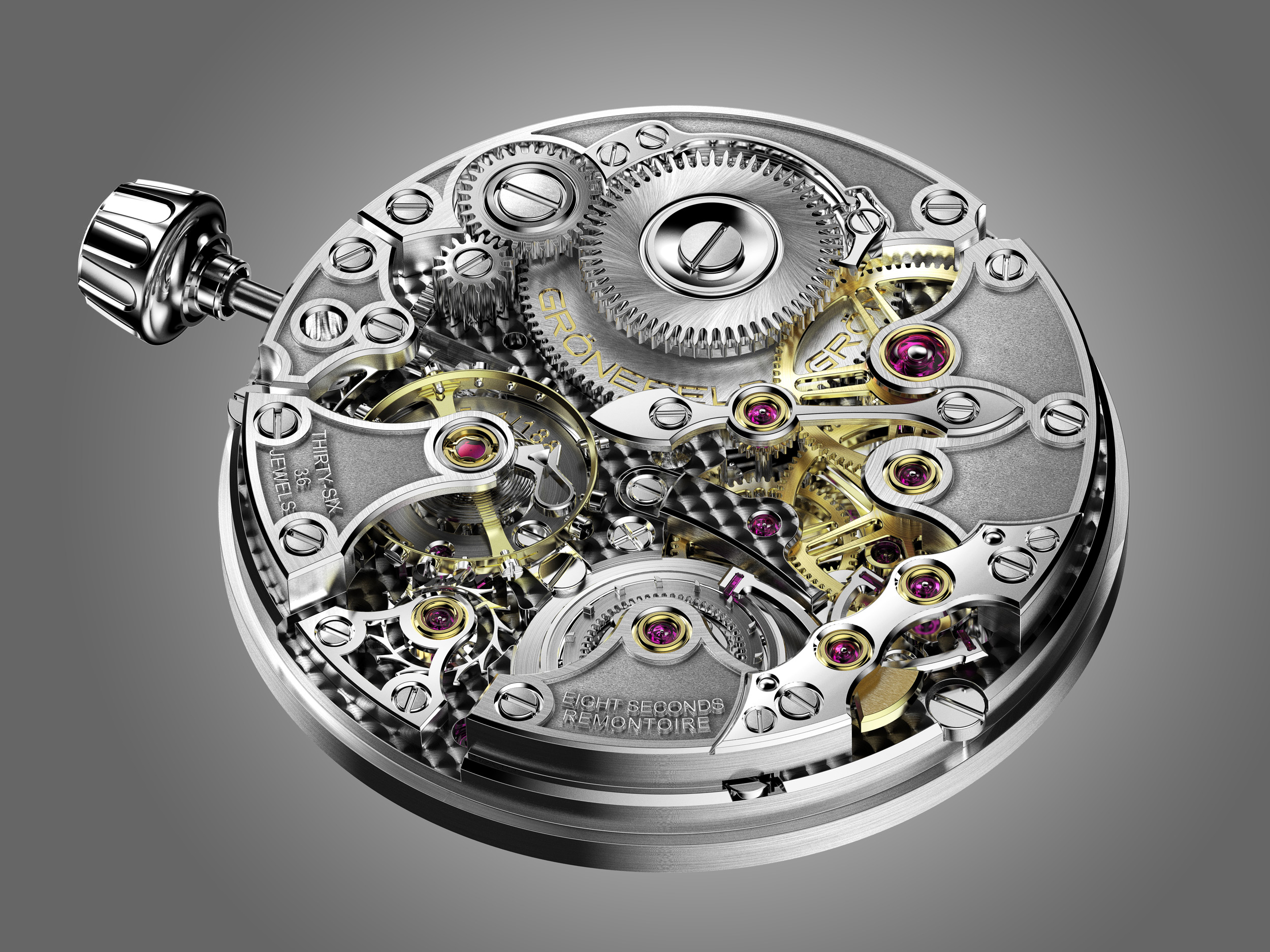 The G-05 movement is astonishing. Grönefeld©

To conclude this story, I can only say this is another perfectly executed timepiece. Grönefeld keeps putting a smile on my face and I bet on a lot of other faces around the world. It’s not for the fact that this is a Dutch product, but it makes me proud to see that such a small country delivers such a great product in an industry ruled by old Swiss legends and tales and stuff. Grönefeld is in my opinion a brand for the true watch lover and I hope they keep it that way. Leave the popular trendy things to brands who lack passion and keep up this fantastic work Tim and Bart.

Remontoire
To optimize time keeping a small hairspring is wound every 8 seconds to guarantee a constant force for the escapement. A complex satellite gearing mechanism with hypocycloidal gears, twin ball bearings, pinions and jewelled levers, achieve this 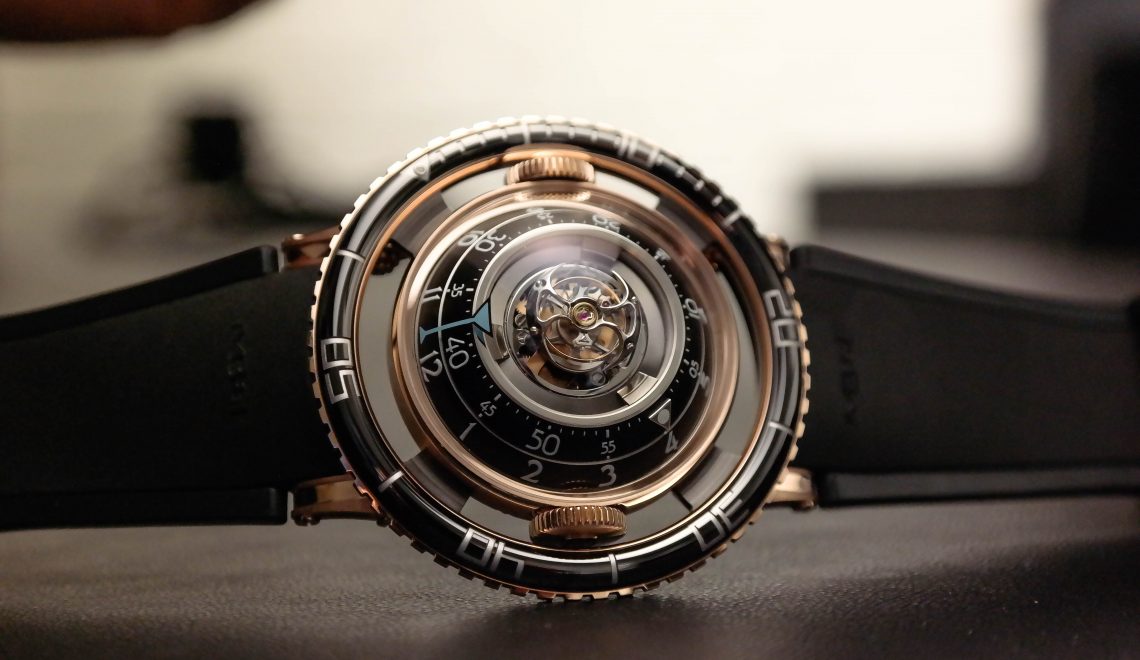 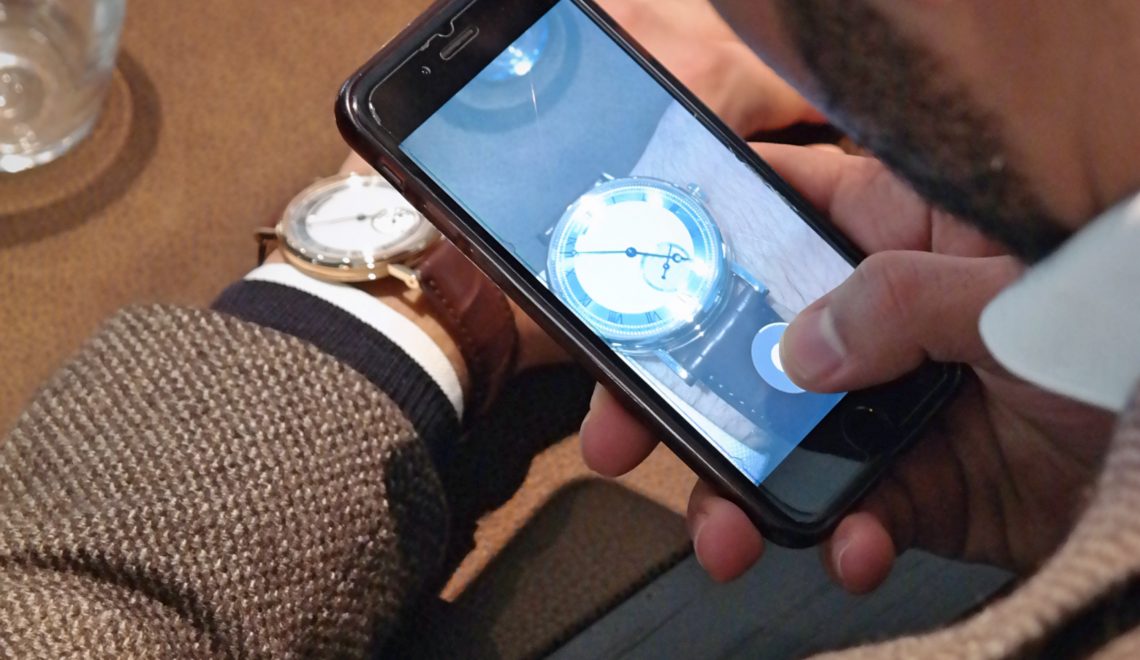 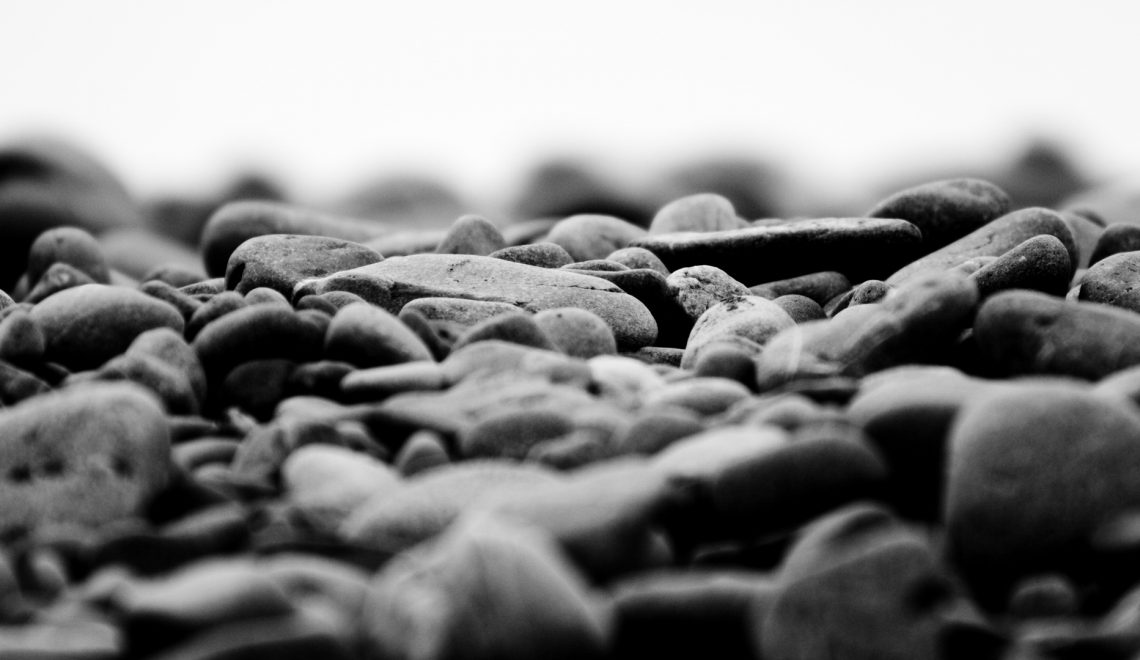 Brands
Just a few of our own.. dreams you could say?