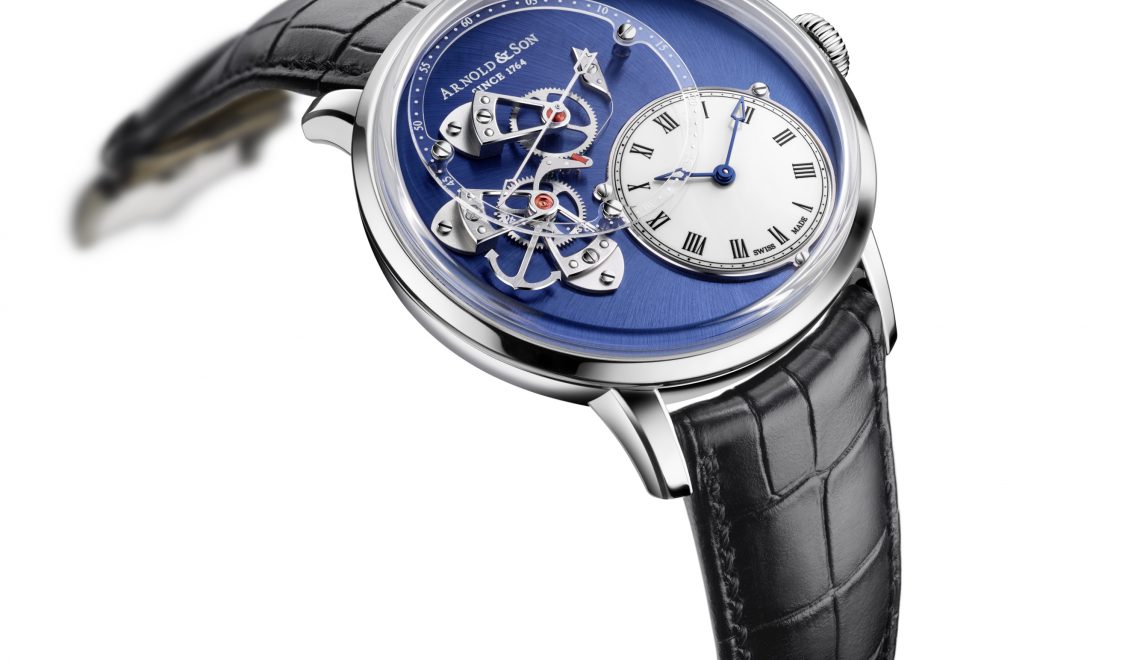 The British are not only well known for their sports-cars, fish and chips, but also for Arnold & Son. The Marine Chronometers found their history in England. John Arnold was one of the very first that used the titel “Chronometer” for his accurate Marine Chronometers, around 1782. The history of watchmaker John Arnold was the inspiration and the foundation of the heritage surrounding the Arnold & Son watch brand. An English history but Swiss made, and believe me,  if you are familiar with driving and restoring British sports cars it is not bad to ad some Swiss technology to a Bitish product. Passion multiplied with passion is never wrong.

Let’s talk about the newest model of Arnold & Son, the DSTB. DSTB stands for Dial Side True Beat. The watch features and in-house mechanical movement; self-winding, solid 22-carat red gold guilloché oscillating weight. The True Beat is a complication that shows a “dead beat” second hand instead of a “swiped” secondhand. This is a complication that Arnold & Son aplies often. 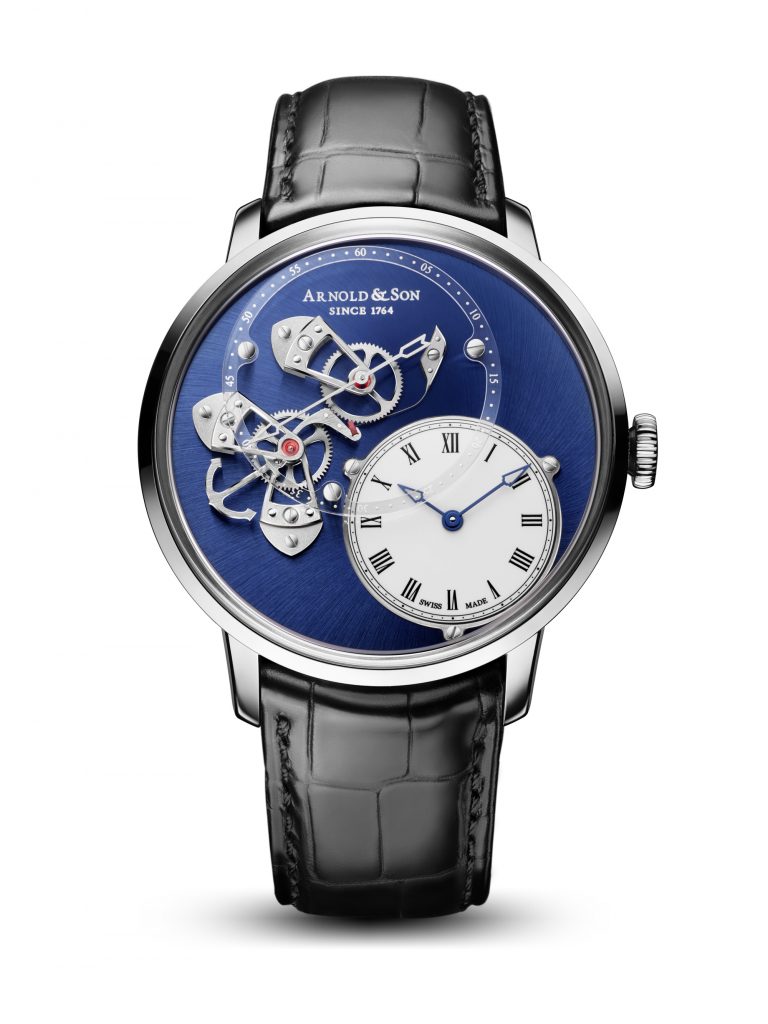 I’m personally not a huge fan of the crazy skeletonized movements that are designed to show the complexity and crafmentship, but Arnold & Son found a way to show their technical complication in such a way it’s delicate and classy. The technical and estetical sides of this watch are perfectly balanced. The true beat seconds are indicated via a large sapphire subdial that occupies the top left portion of the dial at 11 o’clock. At the 4 o’clock position, a domed and white lacquered subdial indicates the hours and the minutes via blued hands. These generously proportioned, overlapping indications translate into a stunning three- dimensional dial. For the Arnold & Son fans this model won’t be a stranger; this setup is known from the True Beat 250th Anniversary Edition from 2014.

The true beat seconds is a traditional complication of Arnold & Son, and this watch pays tribute to the watches produced by John Arnold during the second half of his career, when he and his son were the first to develop marine chronometers that could be produced in quantity at reasonable prices. Those technically superior, widely distributed chronometers reflected Arnold & Son’s commitment to exceptional precision and solved the problem of determining longitude at sea.

This restructuring of the intricate mechanism yields a concept not achieved in the watch industry. The self-winding calibre A&S6003 has 229 components. In true Arnold & Son style, the palladium treated movement features hand-chamfered and a satin-finished lever and bridges, polished edges and fine circular graining and Côtes de Genève rayonnantes. The visible dial plate is blue PVD treated with large circular finishing, and screws with bevelled and mirror-polished heads. When you look at the movement it is truly like a painting of one of the masters, how the colours are playing with the dividend finishing. If you can get inspired by a colour than it is blue for sure. The dial of the watch is almost Yves Klein blue. In the journey to find perfection Yves Klein found the “perfect” blue. Arnold & Son is also on a journey to master perfection, did they get inspired by Klein? 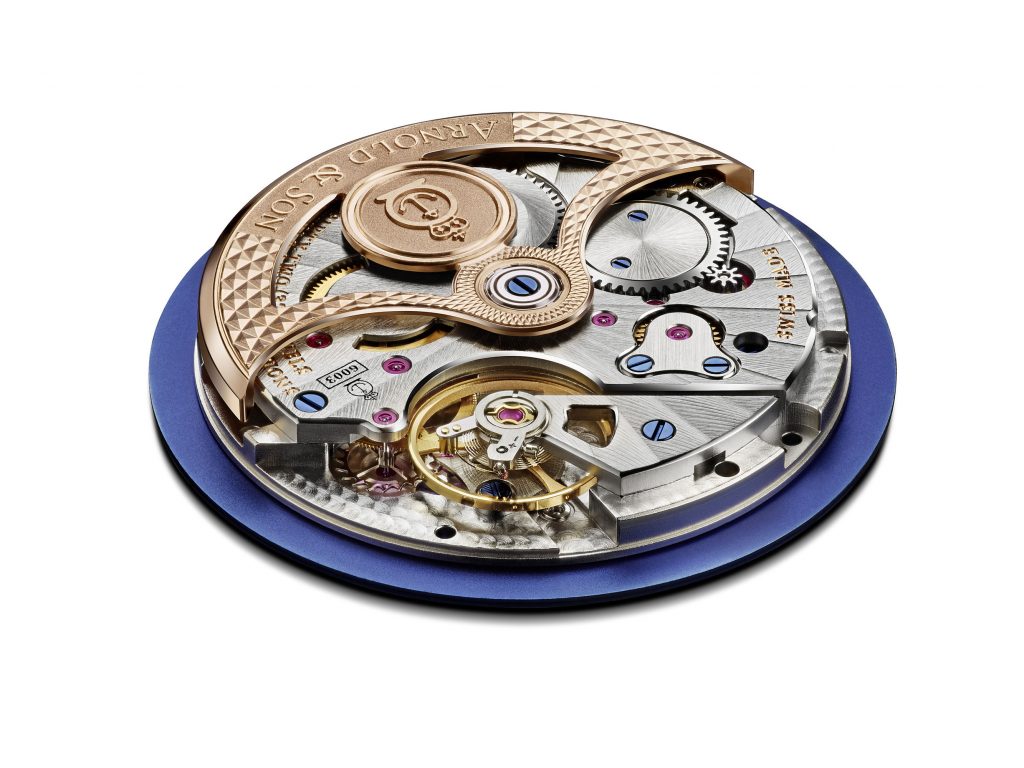 The 18-carat white gold case with anti-reflective sapphire crystal and caseback for viewing the superbly finished movement and, complete with solid 22-carat red gold guilloché oscillating weight. This edition of the DSTB will be limited to 125 timepieces.