Linde Werdelin Oktopus Crazy Universe
From the moment I first heard of Linde Werdelin, I was hooked on their designs. No technical crazy stuff or showing off with over the top materials or design details. No, not in my opinion. Linde Werdelin creates timepieces coming from a very individual vision with almost no influence that can be found somewhere else in the industry. I like the way the brand has evolved, going back to the founders watch until now, 10 years later. If you’re familiar with LW timepieces, you’ll probably think I’m a bit crazy ‘no crazy stuff.. design..’. I know, their watches are far from traditional when it comes to the designs, but nevertheless they’re subtle. Every detail and choice in design fits perfectly together, making it a watch that’s not over the top. 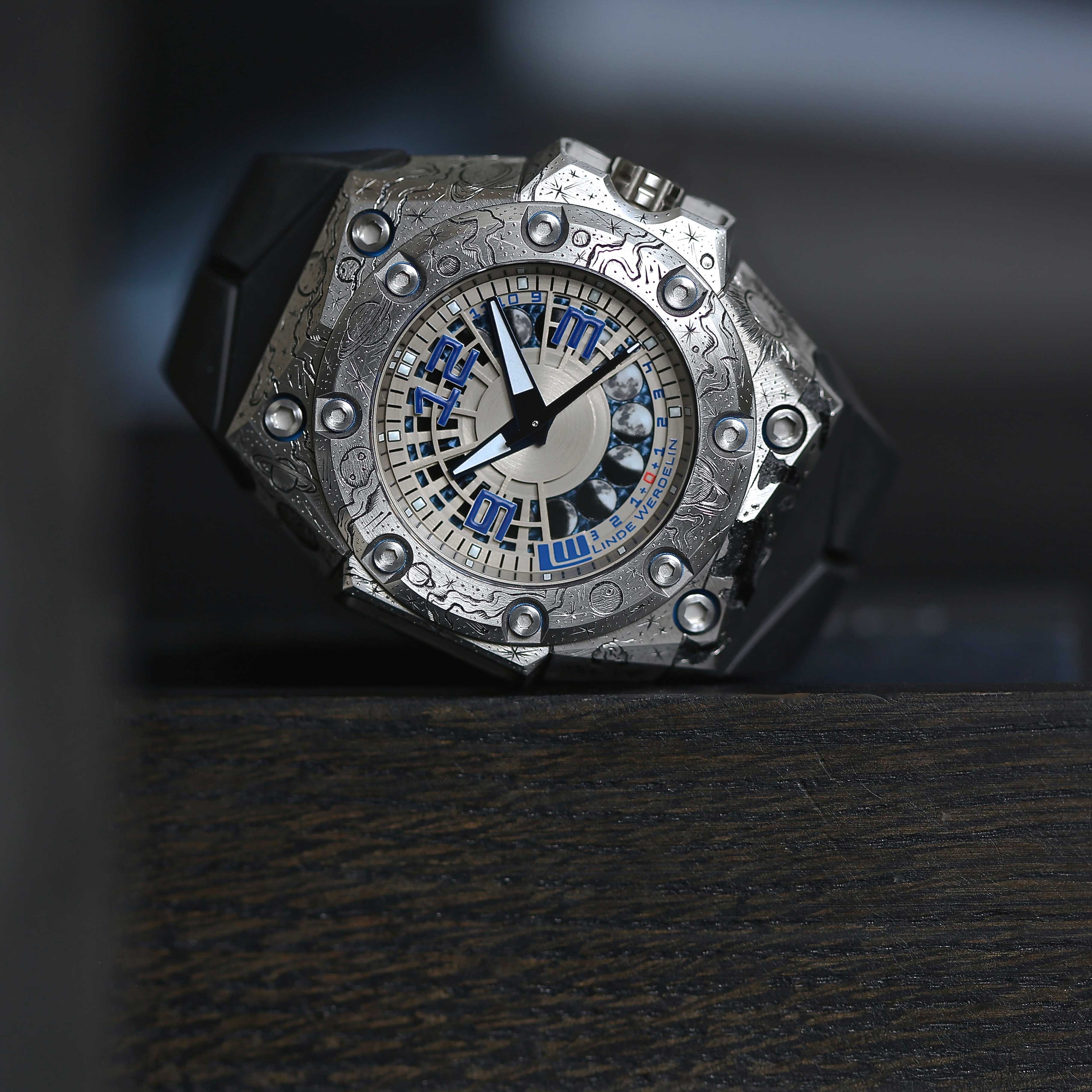 Linde Werdelin and Johnny Dowell
­For this unique piece, the friends Morten Linde and Jorn Werdelin knocked at Johnny Dowell’s door again. Again? Yes, again, because the gun engraver Dowell worked on a Linde Werdelin piece before: The Oktopus Reef. If you’re not a fan of engraved watches, you should probably go and sit with the little kids watching sesame street. This is not for everyone! Anyhow, I’m a big fan, that’s why I’m writing this article. After all, why would I invest time in writing something I don’t even like? Exactly, I wouldn’t. 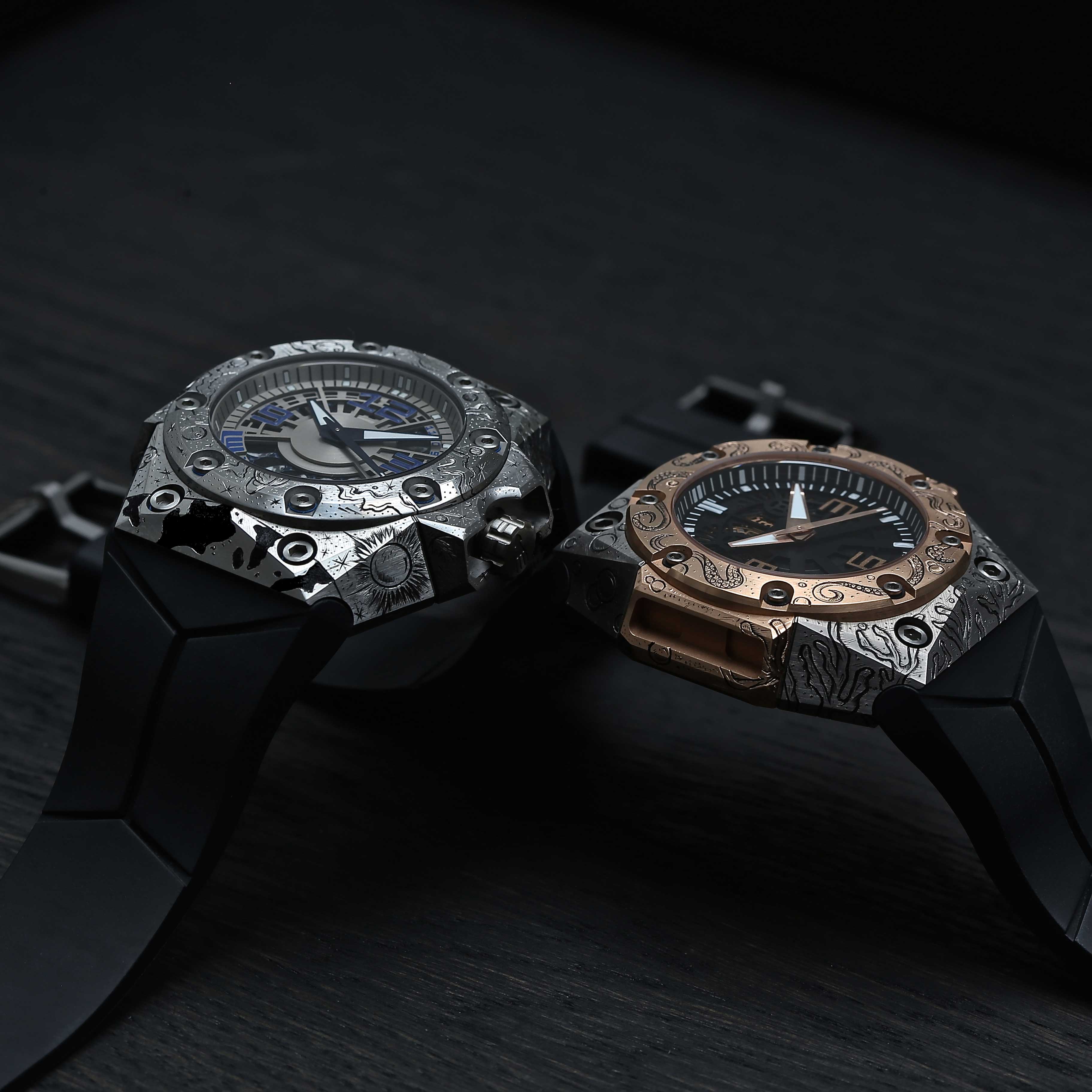 From the darkest depths of the ocean to the never-ending scenery of space
Where the Oktopus Reef displayed the scenery of our oceans, the Oktopus Crazy Universe displays a childhood interest of Morten Linde. ‘As I child I dreamed of becoming an astronaut. There’s such mystery contained in outer space, I never stopped wondering what else could be discovered. To create this space theme was an obvious extension of the watch’s moon phase complication. On top of that, we discovered that Johnny has a fascination for space too’. Happily, they decided to pick a specific theme for the way the engraving is done. Too often, watches are engraved with flowers and strange lines that suggest you should call it art. The Reef edition of the Okto was a very cool piece, since the watch itself has very cold sharp angles; the engraving was the exact opposite. 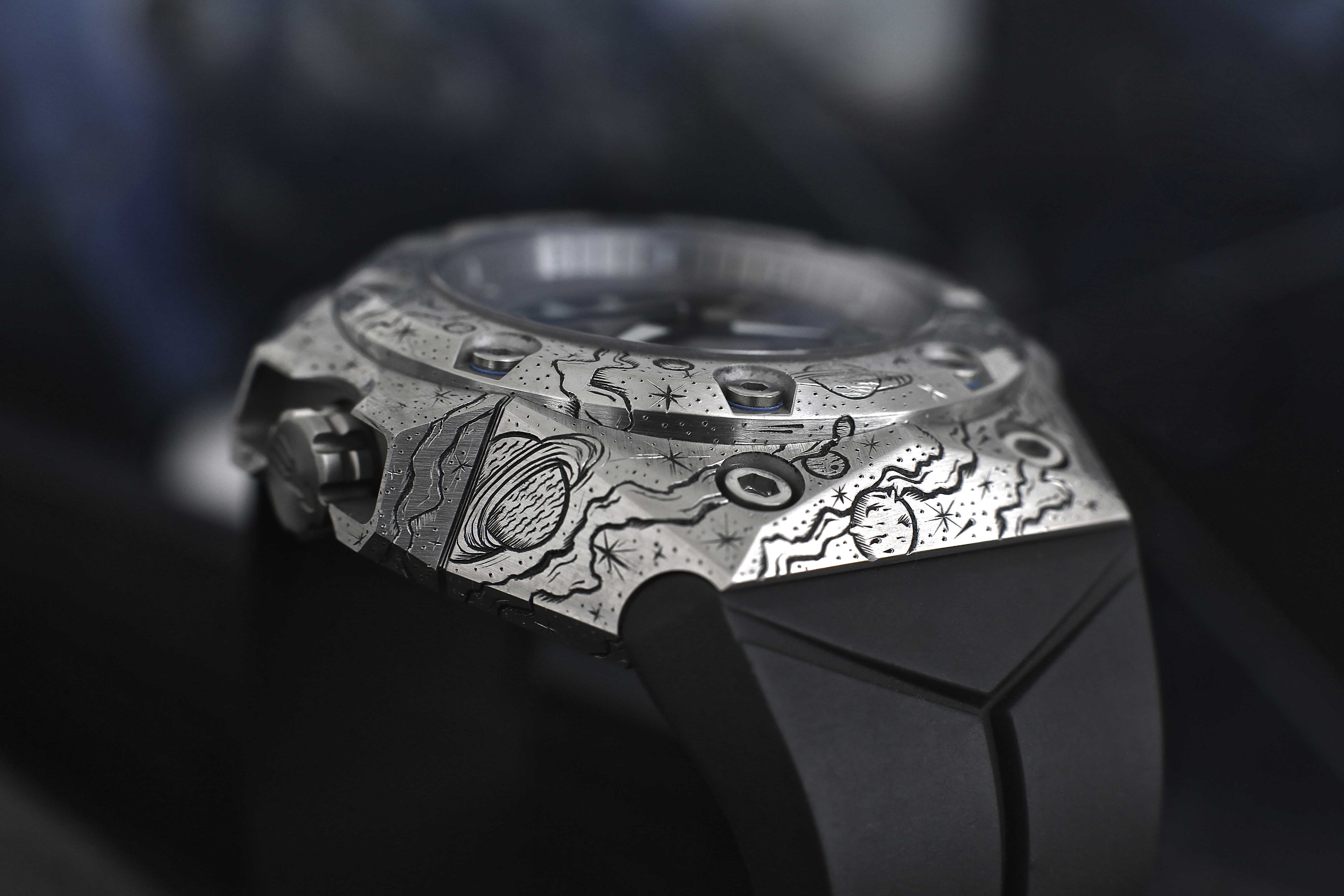 The Linde Werdelin BluMoon is a good starting point
As the engraving adds a special dimension – funny choice of words don’t you think? – to the watch, it was not necessary to do very strange this with the watch that served as a basis. The Linde Werdelin BluMoon is that basis. With a grade 5 Titanium case, this watch is incredibly difficult to engrave. Resulting in tools that shattered to pieces, according to Johhny Dowell: ‘Working on Titanium grade 5 was a great test for me. My everyday tools snapped and shattered as soon as I even touched the Titanium. I switched to tungsten carbide tools which were definitely better suited to the task, but even they were pushed to the limit’. For specifications on the watch, click right here. 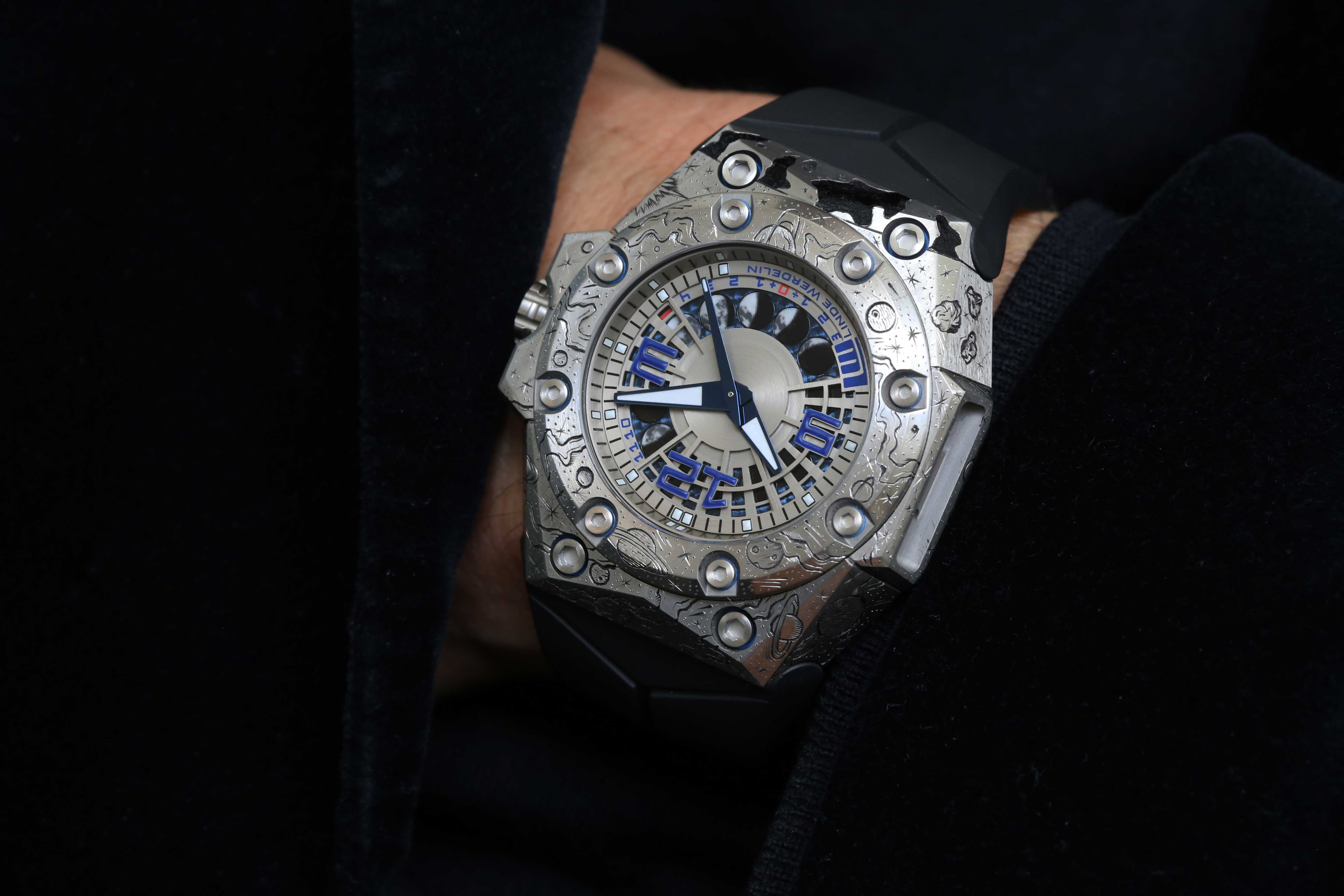 Pluto, Mars, Jupiter and more
A better look at this marvellous piece of art shows different aspects of outer space. Displaying the sun, the earth, the moon and various planets at the 6 o’clock position. A better combination can’t be found. The cool moon phase of the BluMoon is even better finished with these engravings. Making it a themed watch with a very, very, very cool look.

Linde Werdelin knows what Limited should mean
As we are used of Linde Werdelin, all of the series are limited to fewer than 100 pieces. With the Crazy Universe, this amount is reduced to a ‘handful’. Since I’m not speaking to Morten or Jorn, I have no idea of what a handful means, but expect these pieces to be extremely limited. After all, each of the engraved watches has about 100 man hours of engraving in them. That’s a very serious amount of time for such a watch.

For more information on this watch, visit the Linde Werdelin website. 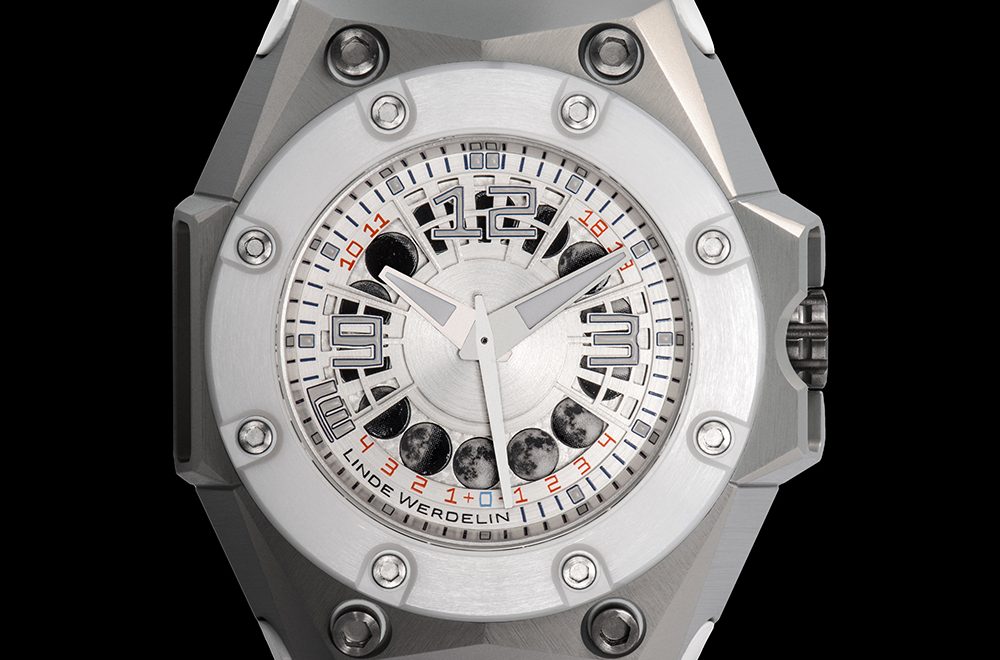 Reviews
Another Oktopus emerges from the depths | Linde Werdelin