Patek Philippe celebrates 40 years of Nautilusm
Hooray. We congratulate Patek Philippe with 40 years of Genta heritage and the ongoing popularity of their Nautilus model. Of course being 40 asks for a party so this is what happened. The Nautilus – one of the most popular watches in time – survived 40 years of changes, design revolutions and drama in the industry. To celebrate that, Patek Philippe introduces two new ‘40th anniversary models’. 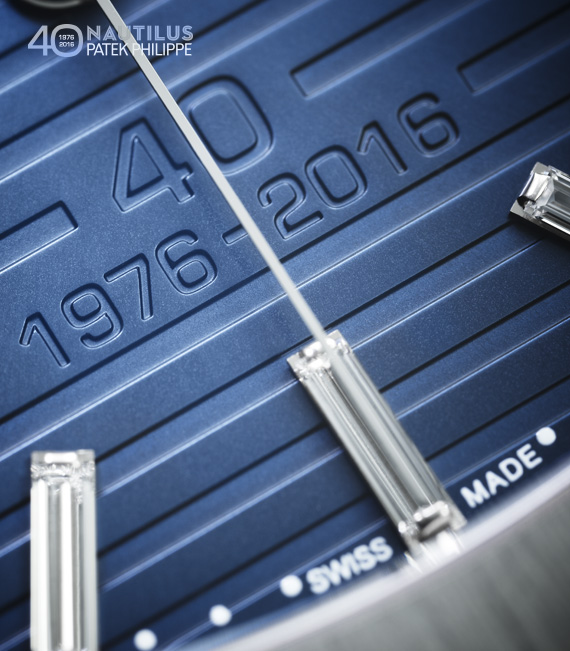 A new Chronograph 5976/1G and the new 5711/1P
First of all, no, GQ did not make any mistake when they came up with the measurements of this watch. However, there are two new versions and – believe it or not – they are both based on the Nautilus as we know it for a long, long time. Before I go on about facts and looks, I like to share my side of the story as in how these two came to live. If you don’t like reading a story about how people invent (not so) new watch models, please skip the following part. 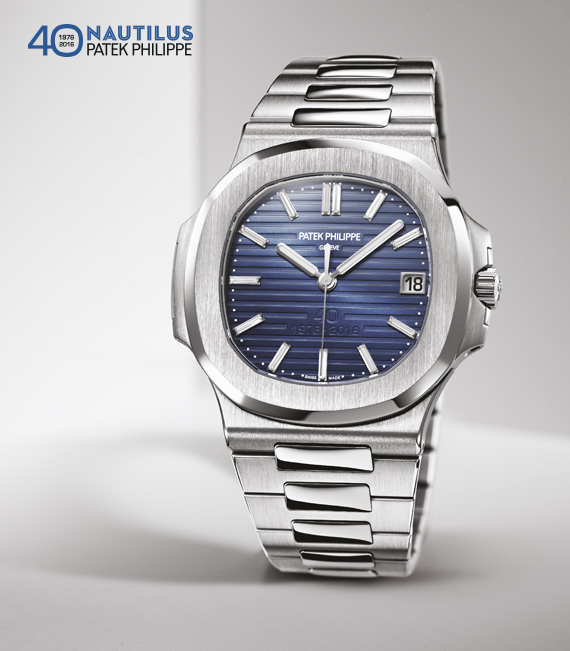 Celebrating 40 years of Nautilus – how it’s done
You see, when the men and women at Patek came to the realization that their most popular model would reach the age of 40, they knew there had to be a big celebration. So my guess is – based on words around town – they threw a big party for each Nautilus in the world. Knowing it would be impossible to come up with an original idea for this 40th anniversary model, they had to be creative. You’re still following? These Nautilus’ had a great time, but – as oldies do – most of them left the party early. Leaving two of their brothers behind. Now, this is where it gets interesting. You see, these two were much the same, at least before they attended the party. So then the party started, it was all fun and laughter until it ended. These two Genta creations were the last ones left and BOOM. Two new 40th Anniversary models were born. One was special because it turned out to be the Nautilus with the best suit of the party, the other one.. well it was just that loudmouth who drank way too much. You know, that type with a shirt too small, a suit with no tailoring at all and a big belly hanging over his belt. So we have a beauty on the one hand – keep in mind the clothes are nice – and a screechy ugly one on the other hand. Since both are different from the ‘normal’ Nautilus, ladies and gents: two new Anniversary models. 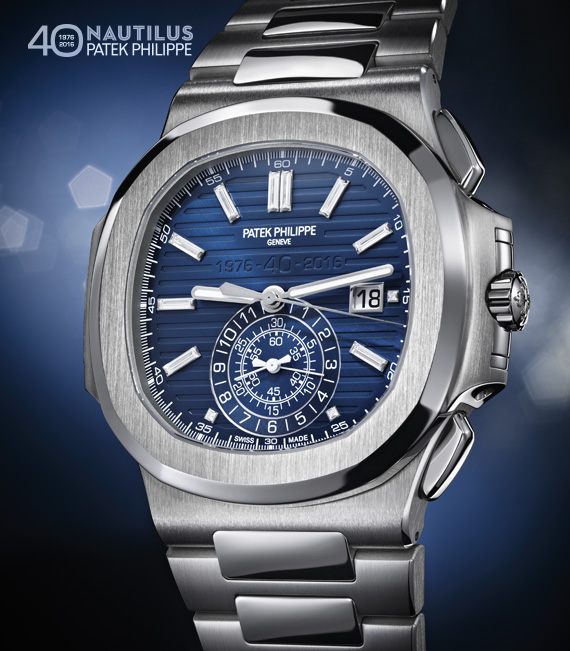 Someone put that Chronograph on a diet
The Patek Philippe Nautilus has always been a respected model within the industry – and I totally agree with all of the kind words for this particular watch. It has been a nice dress watch with sporty aspects for decades and together with the Audemars Piguet Royal Oak, it’s highly ranked amongst collectors and watch heads. Measuring around and about 40mm in diameter and a width of 44mm (with crown) it is perfectly for a man’s wrist and together with the curved design it will never be too huge. That was until it became 40 years old.. As I said earlier on, there are two versions of the 40th Anniversary edition: the ‘normal’ one with hour, minute, second hand and date window and a chronograph. Now, that second one is the fatty with his shirt too tight. This chronograph measures a staggering 44mm in diameter and 49.25mm in width. Good lord almighty, please grab a ruler and start drawing that beast on your wrist. I mean come on! How could they decide to make it so huge? The Nautilus is chosen above the Royal Oak by many because of its rank looks and curved design. Okay let’s compare that with a Coke bottle. Great curves indeed. But this, this makes me think of a jerry can. I mean you could find it very useful and functional, but you’ll never put it down, stare at it and think ‘damn, those curves are nice’. No sorry, no offence to the people working at Patek, but this is really torturing a beautiful design. 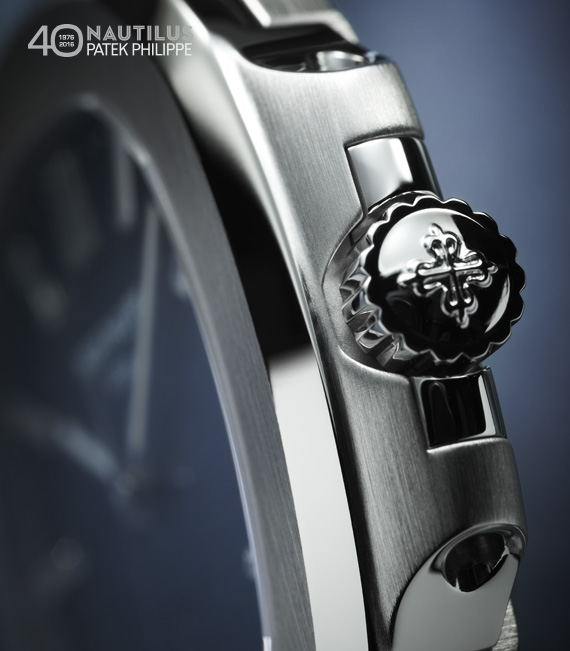 It’s all in the detail. Patek Philippe©

The new  5711/1P
The new 5711/1P is a beauty however. Classical Nautilus with only hour, minute and second hand; combined with a date window. From a Stainless Steel debuting back in 1976, this 40 year younger brother suits up in a platinum case. A big difference and in my opinion a good one. The steel version isn’t wrong at all, but an icon like this deserves a platinum case. This one is 2mm bigger than the original Nautilus, but digging into the history of this models shows us that the original Nautilus was big for industry standards those days. The design department at Patek made sure everything in this new edition is perfectly in balance so, even though you will feel those two extra millimetres, it won’t look bigger at first sight. Marking all Patek Philippe platinum watches, a white Top Wesselton diamond is fitted in the bezel, above the lugs at the 6 o’clock position. Isn’t that cool? 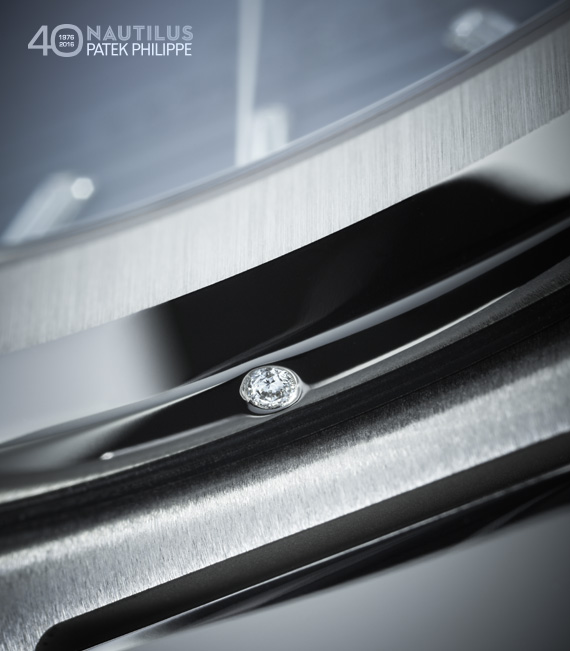 The dial of this 40th anniversary is made out of 18k gold and has a blue fading colour to it. Grading from the inside out, it gives the watch a very distinguished look and divides it from other Nautilus watches. As indexes, 12 batons in 18k white gold topped-off with Top Wesselton baguettes are used. A combination of these two suit the watch very well, however you have to like the usage of diamonds in your watch, if not it won’t be a happy marriage. Above the 6 o’clock marker, you’ll find the lines ‘40’ and ‘1976-2016’ of course underlining the fact that it is the Anniversary model. Only 700 pieces will be produced by Patek Philippe (this goes for both models) and you have to decide for yourself if you think this is limited edition, I’m not licensed to use that statement any longer. 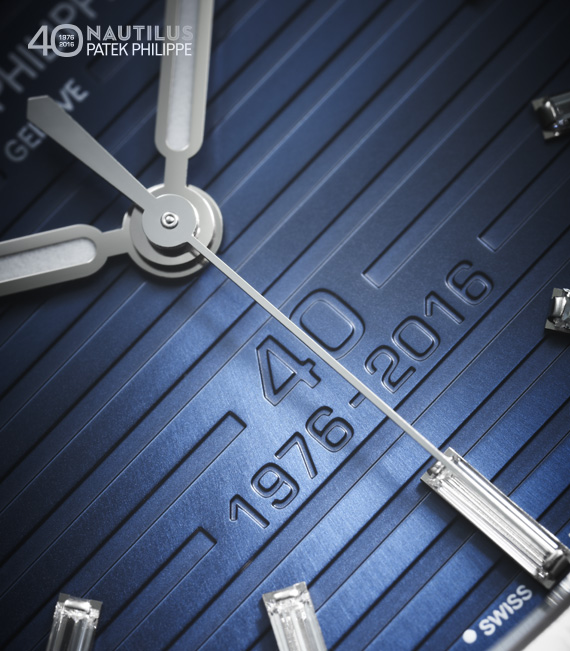 True beauty comes from within
The non-chronograph version lives with a 324 S C movement, well-known for its great accuracy. With a deviation between 2 and 3 seconds, you could state this is very accurate, even for chronometer standards. As it suits, this Patek has a heavy 21k gold rotor, something that you would expect from a watch of this quality. For the chronograph, the CH 28-520 C, fully developed by Patek, is used. This one also has a fully golden rotor. Because Patek uses a traditional column wheel with a vertical disk clutch, there is virtually no friction when the chronograph is used as a second hand. It goes without a saying that the movements used by Patek Philippe are of superior class. On the other hand, you may expect that from a watch with a price-tag that high. 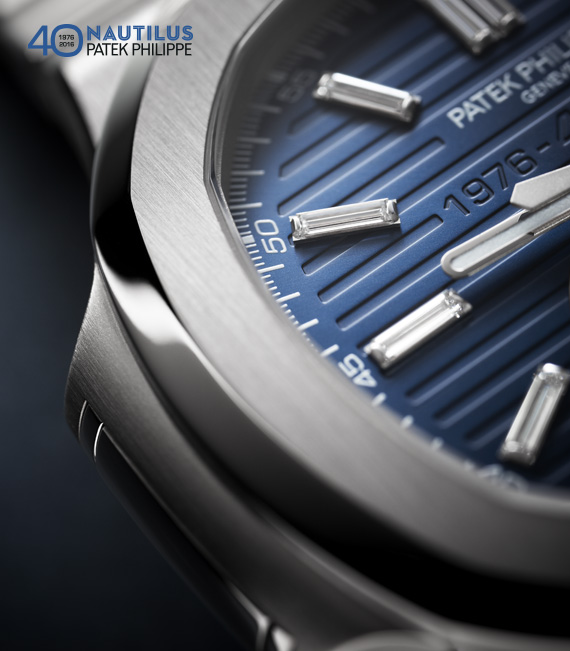 40 year of history isn’t cheap
Since these two beauties come from the house of the four-leaf clover, you do not have to aspect a cheap price-tag. After all, when you have a name, you’re allowed to exploit that as far as possible. If you have a lousy $96.390 to spend, you can be proud owner of the ‘fat’ anniversary edition also named 5976/1G Chronograph. If that won’t do the trick and you want the best looking of these two – keep in mind the price of beauty isn’t cheap – you’ll have to pay a whopping $113.400 and own a 5711/1P. That’s an enormous amount of money, but then again, you are one of the 700 lucky owners of a 40th Anniversary Patek Philippe Nautilus. Now who doesn’t want that?

Deciding whether you like a present or not
Everyone knows that feeling you get when someone gives you a present that you don’t really like, but you enjoy it anyways because that’s morally wanted. That’s the feeling I get with these 40th Anniversary editions. On the one hand we have the 5711/1P which is nice and looks good – but still it remains a Nautilus as we know it. On the other hand we have the 5976/1G which is also nice, if it weren’t for that Mr. Olympia audition it wants to do. Patek Philippe is a respected brand and I think that’s what it has to be. We as watch enthusiasts have to respect what this brand has done for the industry and the load of beauties it created over the years. However, that doesn’t mean a brand like Patek can’t make mistakes. This new chronograph is a mistake if you ask me. It is everything that a Nautilus shouldn’t be. It is way too big and above all, it is almost exactly Patek’s 30th Anniversary celebration. Sorry but I feel like I’m missing something. We should’ve been surprised with these two new models, but all there’s left is room for complaint. Something did not went well here. We are looking forward to see the wristshots. 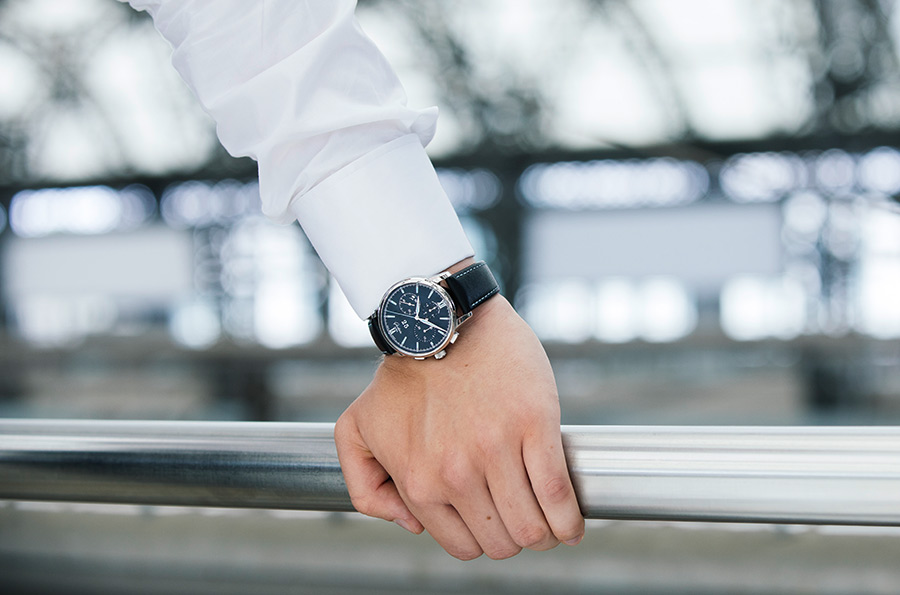 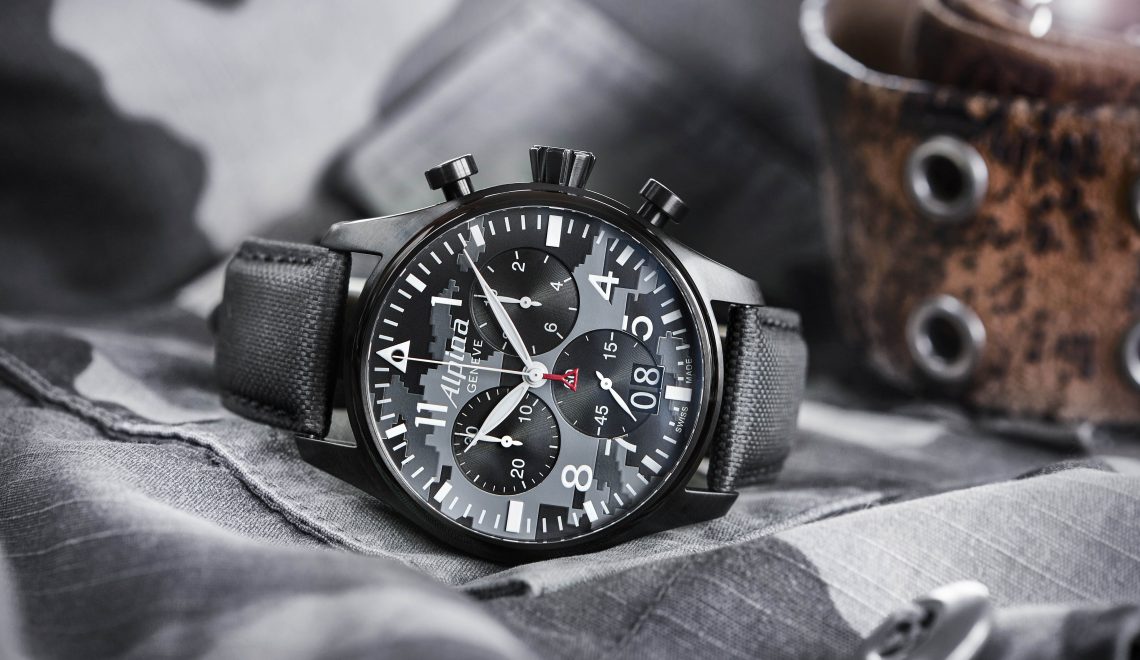