Today’s match up for our pre Baselworld conversation will be Regulator versus Regulator. On the one hand, we have a regulator tourbillon with extremely modern design aspects and on the other hand there’s a very classical inspired regulator. Both watches seem to appeal, both with their own strengths.

Louis Erard – Excellence Regulator with Power Reserve
The Louis Erard Excellence Regulator is – as seen in the pictures – the classic one of this Regulator duo. What directly appeals when you see this watch is the silver-toned guilloche dial. The regulator is placed in the middle of the dial, with hours and minutes on respectively 12 o’clock and 6 o’clock. I’m very interested in the edges of the sub-dials, to see if the finishing is perfectly executed. 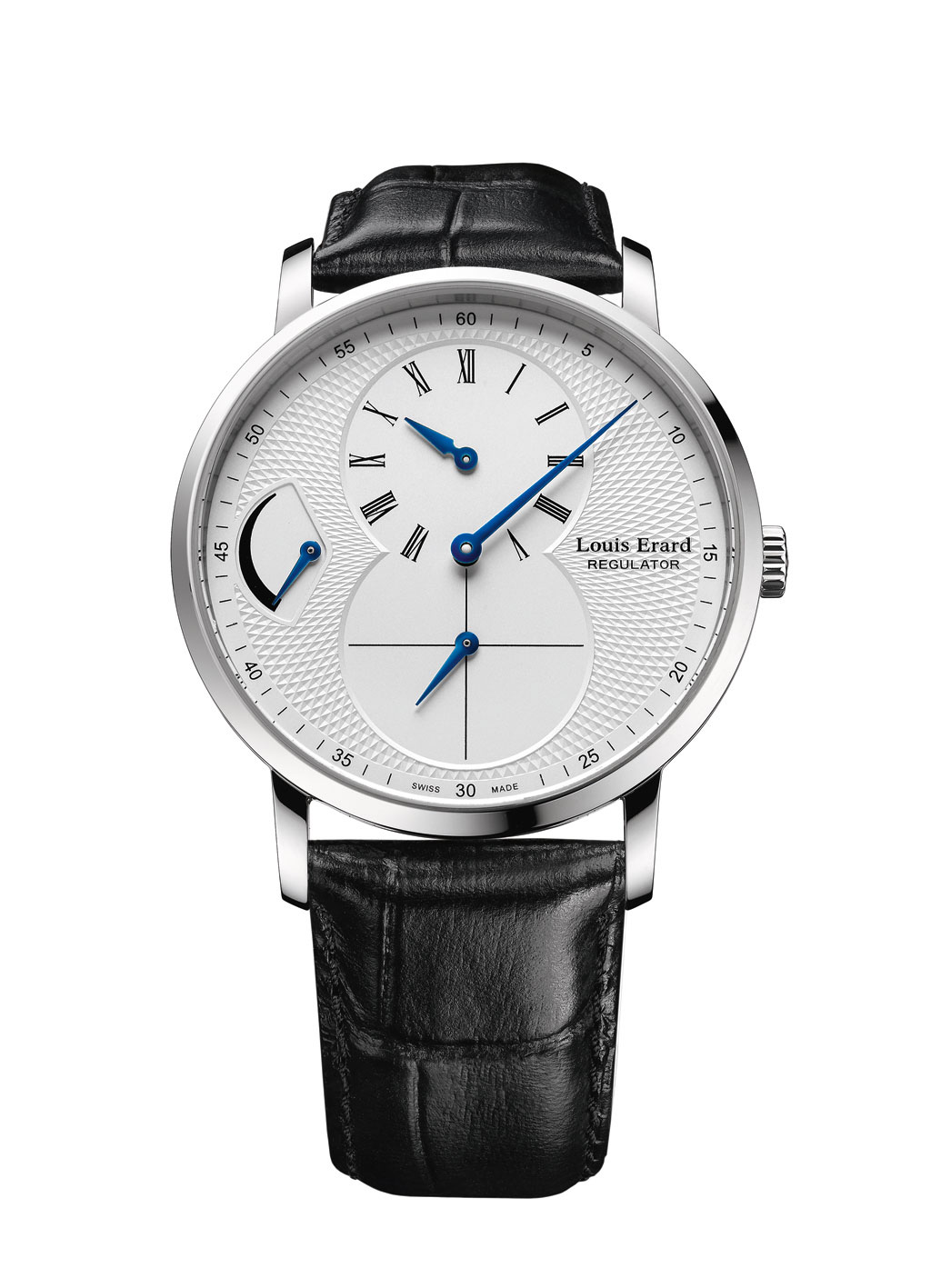 Because of the design aesthetics of this timepiece, it seems that the case of this watch is shaped like an egg placed on its side. However, a closer inspection tells us this is a way of interpretation and not reality. Some details of this watch aren’t as well executed as they could be. By this I mean that there are a few aspects that raise a few doubts.

It looks good that there’s been chosen to use roman numerals for the hour sub-dial, however the placement of a vertical and horizontal axis in the seconds sub-dial is a bit off-topic. It doesn’t match the overall balance of this watch. Besides that, I’m not quite fond of the very small indices on the main dial. But then again, my personal taste. 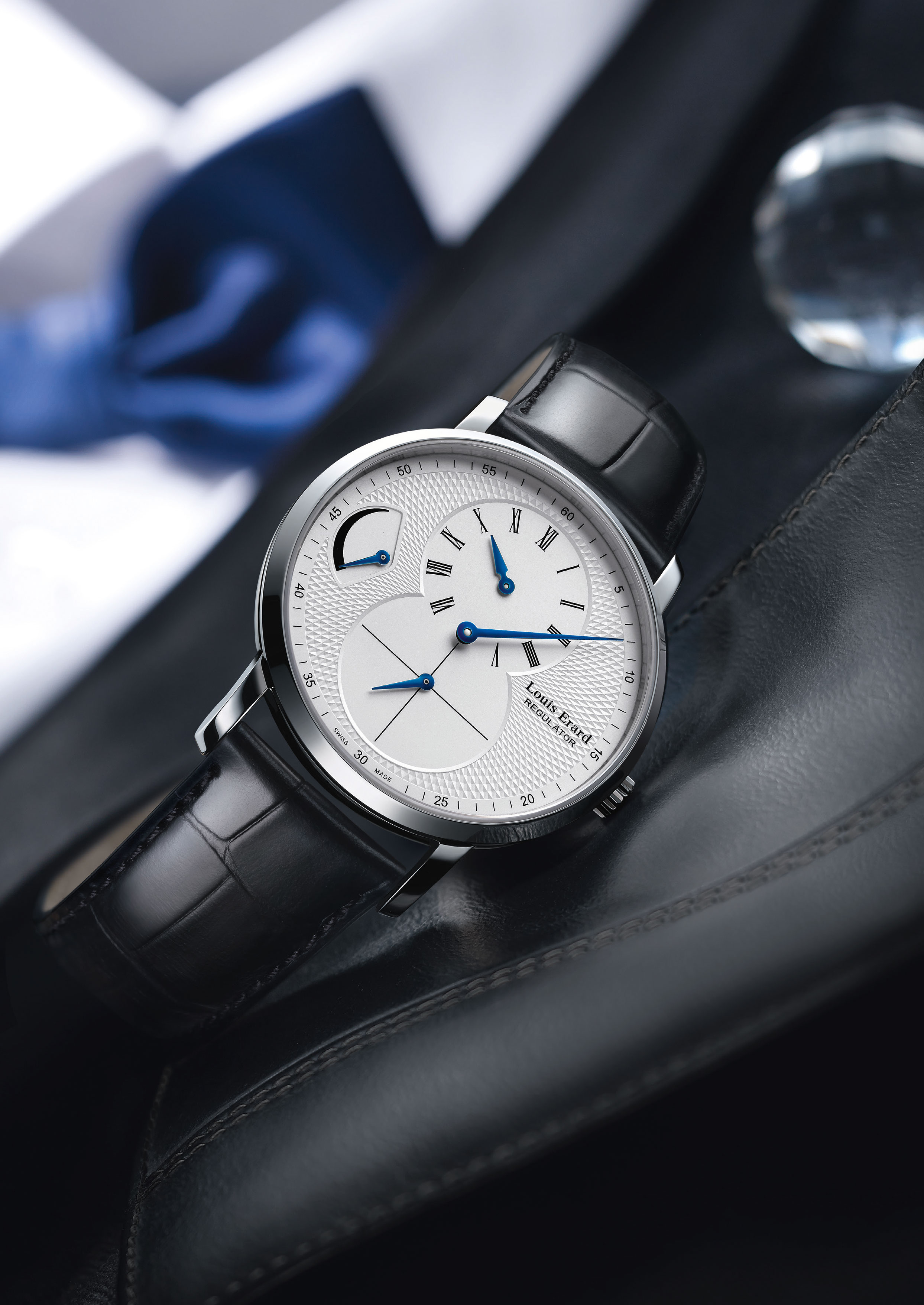 The watch is powered by a mechanical hand-wound ETA 7001 RE9 with Louis Erard Regulator module and Power Reserve module. All of this is placed inside a 40mm measuring stainless steel case with a water-resistance of 50 meters. This timepiece will be strapped around your wrist with a black leather strap. If you want, there’s also a 42mm diameter size powered by a Selita SW200 Calibre with an Dubois-Dépraz 14072 Regulator module.

The Louis Erard Excellence Regulator is an exquisite timepiece, with a lot of classical aspirations. However, it’s not my piece of cake and – although it looks nice – doesn’t light my fire. 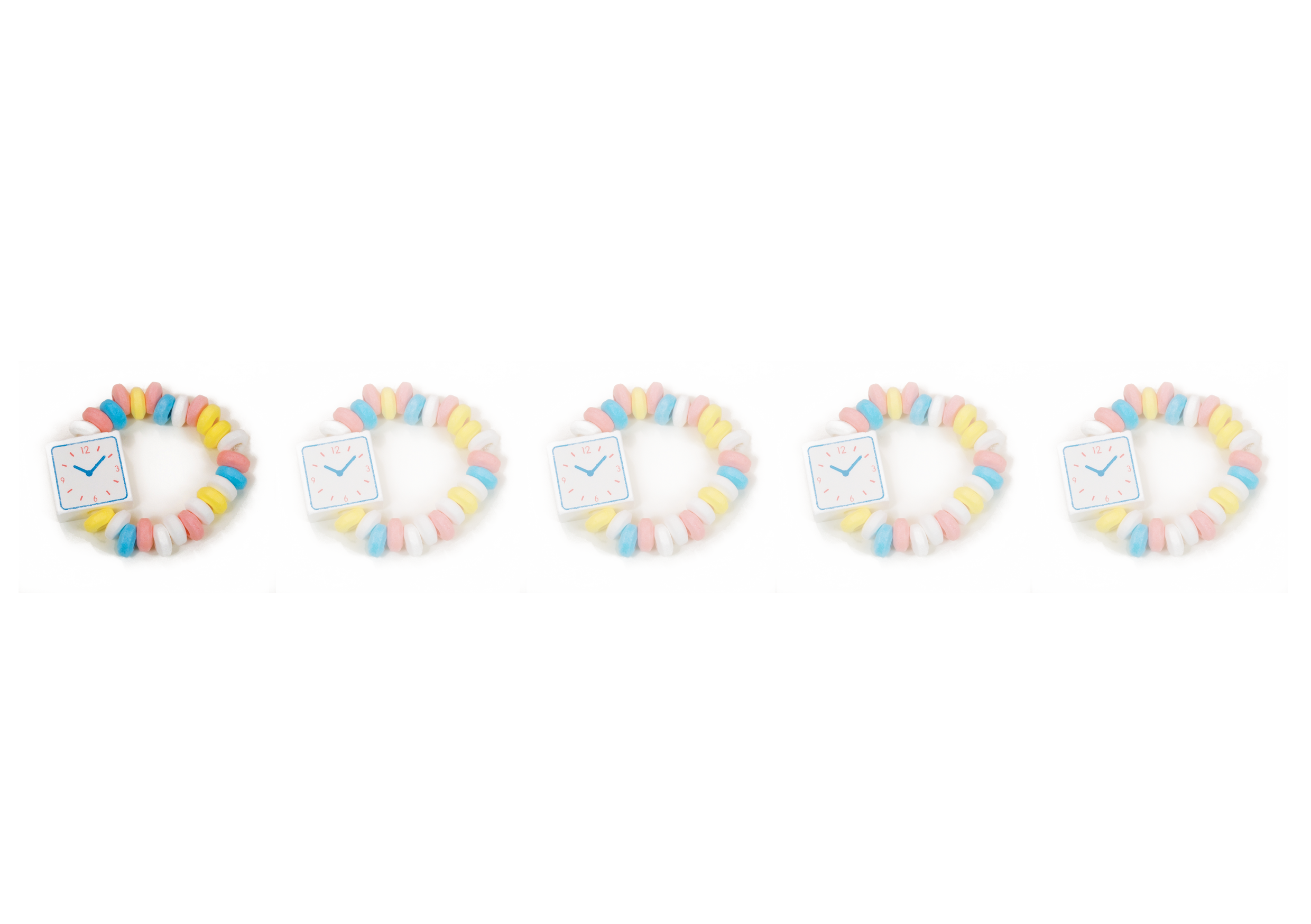 The Louis Erard is nice, but nothing more. Nice is good, but not inmediately insanely cool.

Rebellion Timepieces – Predator 2.0 Regulator Tourbillon
The second Regulator in this article is one that’s totally different from the first one. Far from classic and guilloche-dialed, this Rebellion Regulator has the looks of a timepiece that could be part of Iron Man’s personal collection.

What’s cool about this timepiece is the fact that it’s visibly build out of parts and modules. Making this timepiece very interesting and appealing to the naked eye. After all, examining a timepiece is one of our favourite hobbies. The Predator 2.0 Regulator Tourbillon exists out of a lot of different levels and angles, making it a very futuristic timepiece. The tourbillon is placed at six o’clock, whereas the regulated hours and minutes are placed on 10 o’clock and 2 o’clock. 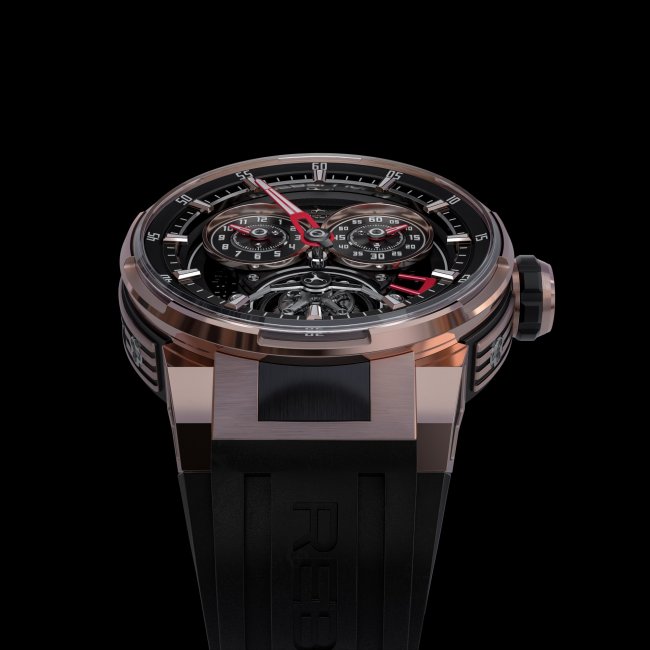 As said, this watch is made especially for Robert Downey Jr. and his flying superdude suit. Not really, but anyhow, as a result this timepiece measures a staggering 48mm. So if you’re big hearted but small wristed, please step back. The case exists out of Titanium, Black DLC Titanium, 5N Gold and Carbon. Which means there are a lot of different production aspects and phases to this watch. Besides that, Rebellion gives you the option to customize the watch. 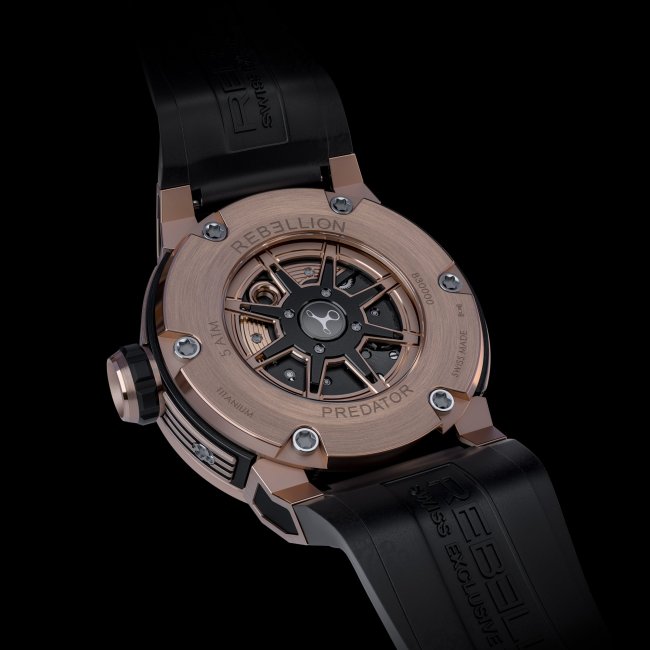 What this Predator 2.0 Regulator Tourbillon has in common with the Louis Erard Regulator is its water-resistance. Like the Louis Erard, the Predator is also water-resistant up to 50 meters. Now, as we all know a lot of brands offer different straps to their watches. Rebellion bought the rainbow and – as a result – you can choose almost any colour you like. With any colour, I mean: black, brown, red, blue, yellow, purple, white or orange. All these colours on a vulcanised rubber strap with a folding clasp. 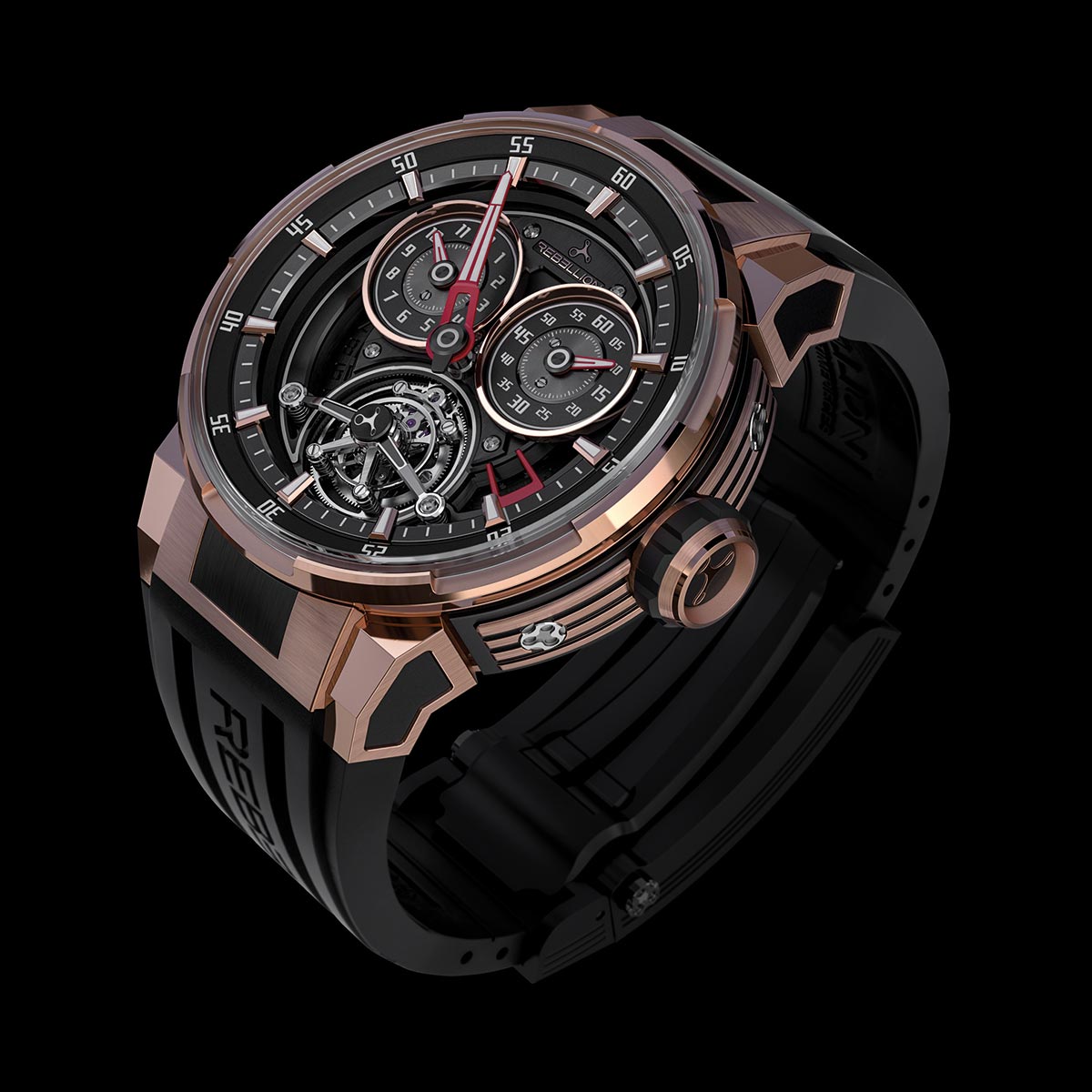 The Rebellion Predator 2.0 Tourbillon Regulator is a cool timepiece. Of course, you have to like these modern ways of watch making, but still. A big problem for this timepiece is the fact that you need Hulk’s wrist. I’m not green and 42mm is my absolute top for size. 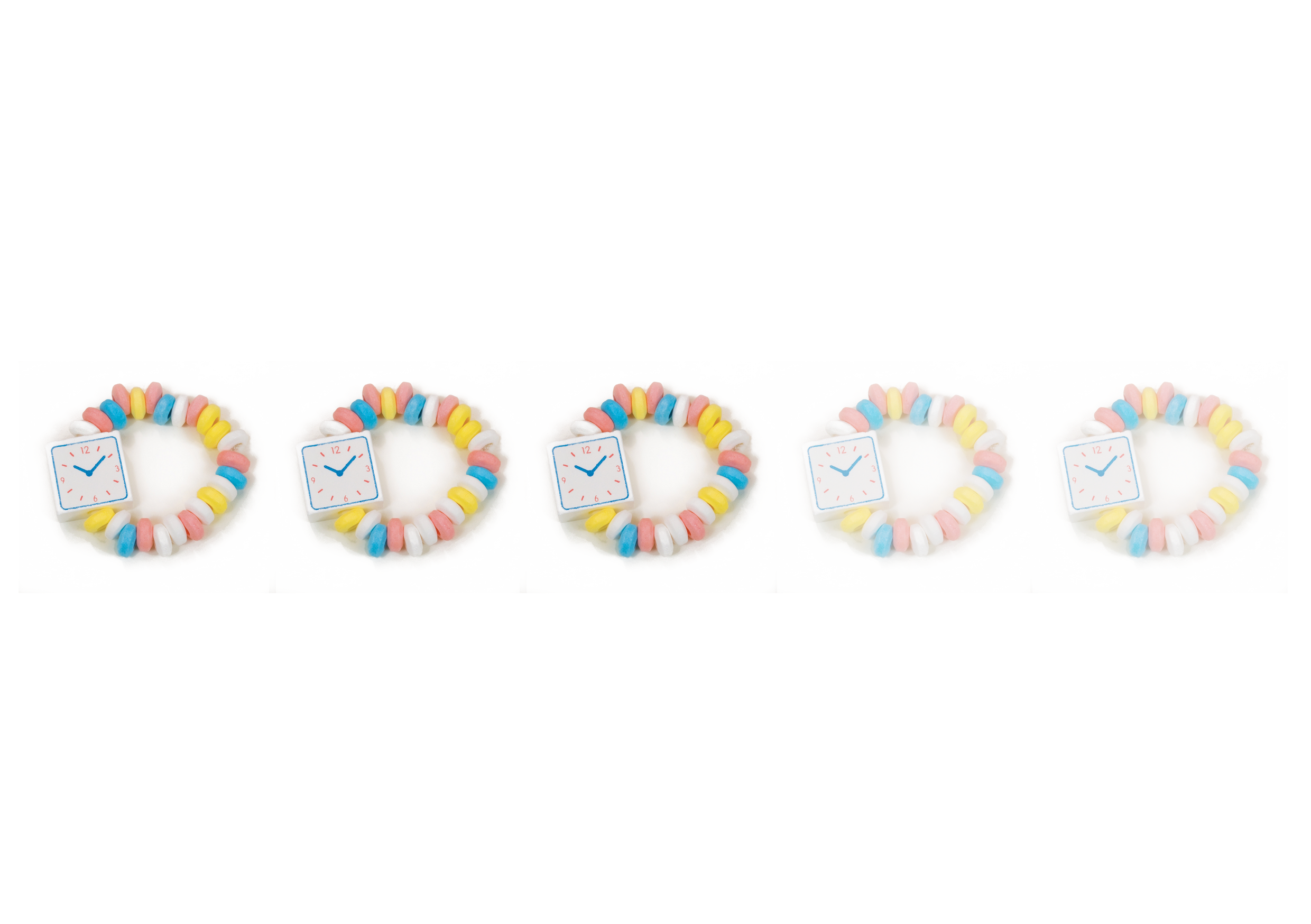 Rebellion is known for crazy creations and – if you believe it or not – this Predator 2.0 is pretty ‘normal’ for the brand’s standards. Still, a very cool timepiece.